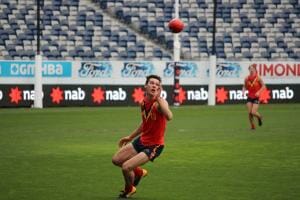 DRAFT ANALYSIS: "Super talented and athletic South Australian whose speed and skill allows him to play a multitude of roles."

There is little doubt 2018 will be looked back upon by South Australian Connor Rozee as an extremely successful one, from both a personal and team perspective. Very few players are given the opportunity to win titles or premierships, yet the highly-touted Port Augusta product experienced triumphs in the National Under 18 Championships with the Croweaters, and at senior South Australian National Football League (SANFL) level with the North Adelaide Roosters, all before entering the AFL. Having spent the first portion of the season plying his trade at Reserves level, Rozee entered the frame during the middle-to-latter stages of the season and finished with 12 senior games under his belt, including four finals. Rozee, alongside fellow under-18 state team member Boyd Woodcock, was particularly impressive against Woodville-West Torrens in the infamous preliminary final, amassing 15 clean disposals and taking seven marks. Although he was quieter in the big dance, Rozee certainly had his fair share of big one-on-one moments, both offensively and defensively, and ceased to disappoint.

A member of the AFL Academy, Rozee has long been ear-marked as a likely early pick, ever since being awarded the Kevin Sheehan Medal as the best player at the Under-16 Championships in 2016. With his blistering speed, eye-catching run and carry, freakish cleanliness at ground level and handy versatility, Rozee is able to ply his trade in a wide range of roles and positions. Also a state-level cricketer as a junior, Rozee is a tremendously talented teenager with undoubtedly one of the highest ceilings of the draft crop.

South Australian medium utility, Connor Rozee showed off his supreme athleticism with a strong performance at the National Combine, clocking times of 2.90 seconds in the 20m sprint (narrowly edging out his perhaps more highly fancied state teammate Izak Rankine) and 8.32 seconds in the agility test before posting an 88cm running leap. But crucially, Rozee’s extreme athleticism is regularly showcased on the field, not exclusively on the track. For example, when utilised across half-back for the Roosters, Rozee was able to drift back with the flight and safely spoil the ball away from an opponent or over the goal line. Despite almost appearing to mistime his leap, Rozee was seemingly able to hang in the air to complete the defensive act. Similarly, Rozee uses his leap to take a series of spectacular soaring marks. Equally as breathtaking is his ability to run and carry the ball, using his elite speed to break down opposition lines. His speed also allows him to chase down and apply plenty of defensive pressure, combined with his hard, aggressive tackling.

Not only does Rozee have a range of defensively appealing traits, his speed, cleanliness and foot skills make him a damaging player when in possession of the Sherrin. Possessing a booming long kick, Connor is also able to pick out more precise targets over a variety of distances, whilst his freakish cleanliness at ground level further demonstrates his supreme class. Rozee is also clean overhead, holding the majority of his marks and flying high to haul down big grabs. Importantly, these traits can be used in just about any position on the ground, which leads to another primary strength of Rozee’s. For South Australia, the future-star was perhaps a bit below-par, deployed across half-forward and down back at-times as the sides handy swingman.

Rozee, like most of the top echelon of 2018’s draft pool, appears to have minimal flaws in his game. However, the two most obvious areas in need of improvement can both be dealt with relative ease once he enters a professional organisation at the highest level, the first being his strength. Tipping the scales at just 72 kilograms, Rozee will require a couple of solid pre-seasons spent toiling away in the gym. Gaining a couple of kg’s will allow Rozee to move into a role on-ball in the foreseeable future. However if he is ever to move on-ball, the contested side to his game will also require further improvement. At this stage, he appears restricted to ‘outside’ roles either across the wing or flanks. Winning the hard, contested stuff is not one of Rozee’s greatest assets, and this can partially be attributed to his skinny frame and not having been played in roles which require brute strength. At this stage he appears limited to a role as a small forward, defender or wingman, however the addition of improved contested ball winning would add yet another string to what is already a very crowded bow.

One-third of South Australia’s terrific trio (alongside Jack Lukosius and Izak Rankine), Rozee was unable to consistently deliver his absolute best form at the Nationals, however it was his efforts at SANFL level which really saw his stocks rise from a potential first rounder to a genuine top ten choice. The common view amongst draft watchers is that his attributes are best suited to a role on the wing, however it is anticipated he starts what promises to be a long career as a medium, pressure forward. A member of the so called “elite eight”, Rozee is widely anticipated to be drafted somewhere early in the first round, with some suggesting he may even be selected as high as the Gold Coast’s current pick three.