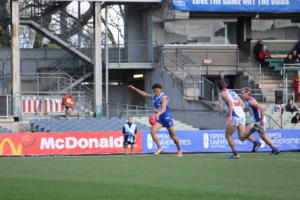 DRAFT ANALYSIS: “Downie is a half-back/midfielder who can incite attacking chains with daring run-and-carry and his penetrating left boot.” – Michael Alvaro

2020 was set to be a big year for Connor Downie, voted in as captain of the Eastern Ranges and ready to try his hand as an inside midfielder. While a top-age campaign wasn’t to be, the 18-year-old still has plenty of runs on the board and the perceived safety of being tied to Hawthorn’s Next Generation Academy (NGA). Downie was one of the rare bottom-agers to crack Vic Metro’s stacked Under 18s side at last year’s National Championships, following on from his outings at the Under 16 and 17 levels. He has proven a mainstay in the AFL Academy system, once again among its intake for 2020 after representing Australia’s Under 17 team and running out for the Futures All-Star showcase. He subsequently earned a National Combine invite, but did not participate in testing on the day. Overall, Downie’s high standards and range of attacking weapons are among the reasons he could be considered a top 30 talent, especially given the runs he has already put on the board.

Downie is an interesting type of outside runner, as he does not necessarily rely on many of the typical traits seen in such a role. What the Eastern product does so well is break the lines with run-and-carry, while also possessing the extra threat of kick penetration. Both of these factors combine to make him an effective meters gained player, with his attacking mindset and willingness to take the game on really compounding his impact. While Downie covers ground well once he builds a head of steam, his transitional play is not heavily reliant on explosive speed or elite endurance. It is more a matter of smarts, as Downie is expert at positioning for handball receives or even to intercept mark when stationed behind the ball. From there, he puts his side on the front foot and can chain possessions on the counter.

At the end of Downie’s runs often comes a booming kick which gains even more ground, unleashed on his favoured left side. Just as he is good at latching onto handball receives, Downie also proved Eastern’s go-to hand-off player when the ball reached the forward 50 arc. Many of his NAB League goals last year came in this manner, while others were simply bombs on the run from beyond the arc. One of his rare majors within 50 metres was a clutch after-the-siren winner against Calder in Round 17, proving Downie’s prowess in the finishing department and overall scoreboard impact. For a wingman/half-back nine goals in 14 games is a very handy return.

Another very favourable trait of Downie’s is his attitude. He was an obvious choice for the Eastern Ranges captaincy this year, especially given the standard he set as a bottom-ager when his side claimed the minor premiership. Eastern is a team-first kind of region, and Downie’s work-ethic to not only meet that status, but to also improve his own game is admirable. It is also something which had Downie pegged as a potential inside midfield candidate in 2020, especially given his 185cm/82kg frame and ability to find the ball. He had a 65 per cent uncontested possession rate in 2019, which was reflective of his role, so more time at the centre bounces would have been great to gauge Downie’s true versatility and midfield potential. As it stands, his style is better suited to half-back or the wing.

Hawthorn once again lays claim to an NGA product in Downie, but may be held quite accountable for his services. Given how they passed on Irving Mosquito at pick 38, the Hawks will very much hope any potential bid comes after their second round selection (currently pick 24) to maximise their draft haul, and have plenty of later picks to cover Downie’s value. Speaking of value, Downie has been pegged around the 25-30 mark in this year’s cohort, so where the incoming bid lands will be tight. It seems unlikely that Hawthorn would pass on matching it anywhere within the second round, especially given the hole Isaac Smith leaves in terms of left-footed outside runners. Downie has the body type and attitude to impact in his first year, but still has some areas left to enhance. The bidding process sometimes sees players slide when placed outside of the first round, but Downie has largely proven his worth when compared to other Victorians and could come into calculations for other clubs.