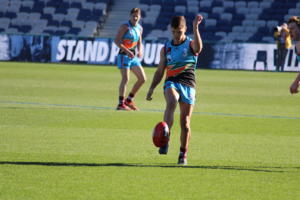 DRAFT ANALYSIS: “Diminutive Gold Coast Academy product Budarick is as clean as they come, able to impact on each line with sharp disposal and heavy defensive pressure.”

GOLD COAST Suns Academy skipper Connor Budarick backed up an admirable bottom-age season by well and truly living up to the bill in his draft year. Budarick impressed for the Suns Academy in its five-game NAB League stint, averaging 25.2 disposals, 6.2 marks, 8.2 tackles and almost a goal every other game, before slotting into the Allies squad once again and joining back with the Suns NEAFL team in the back end of the year. Budarick was as consistent as anyone throughout the year, hardly wavering from his usual output across all levels and proving to be one of the hardest-working prospects on-field. His progression from a pressure forward, to half-back and part-time midfielder make him a versatile player, with his appetite for the contest highlighted by his ball-winning ability and tackling. The Suns may well pick up Budarick as late as possible given they do not have to divulge in the bidding process, but he could have otherwise have cost them a good amount just outside of the first round. Either way, he looks a no-brainer for them to take come draft time.

There is plenty to like about Budarick, who has as complete a game as you would expect to see from a small player. His work rate is through the roof and translates through to his leadership qualities, defensive efforts, accumulation, and ability to adapt to each role he plays. Budarick’s well-roundedness makes him an able player both at the coalface and on the outside, seeing him adapt from that small forward role to a classy half-back and nippy midfielder. He works well around the ground – helped by an elite 21.6 yo-yo score – to win the ball on just about every patch of grass possible, accounting for the high disposal hauls he is capable of. His tackling numbers (8.2 in the NAB League, 9.3 in the National Championships) are arguably the most impressive of the lot though and bode well for playing across each line, while adding to that leadership aspect in the sense that he leads by example. Grunt work aside, Budarick also has the class to make sharp short kicks by foot and does so well, while also proving to be as clean and clever by hand as you would expect from a smaller player. He does all of this so consistently too, only wavering in one national carnival game where he had nine disposals against Vic Metro and not falling below 12 disposals in the NEAFL.

His 18.6 disposal average in the NEAFL and indiscriminate form at senior level also gives a look into how he might adapt to AFL standards, despite his 175cm/72kg frame. His fearlessness and work rate make up for much of the size gap, but as he naturally fills out he may be able to move more into the midfield after likely starting out inside either 50m arc. Splitting hairs, Budarick showed he can work on his finishing in future after a few wayward games in front of goal this year. He looks great when moving forward and creating chances on goal, but sprayed a few chances in his NAB League outings to finish with 2.6 in his five games. A lot of those misses came on the run, so can easily be rectified with some work as he is usually a reliable field kick. The overall package is relatively complete though, with his mix of speed and endurance, and inside/outside traits making him a desirable prospect.

*Eligible to be taken for free without bidding process due to Gold Coast SUNS draft concessions.