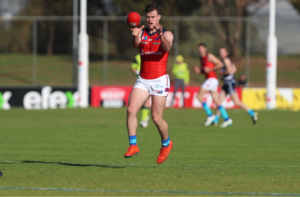 A POTENTIAL future captain, Gerloff has not put a foot wrong since stepping into Norwood and it showed this season, averaging more than 20 disposals and six tackles per game. He still has to continue to work on his endurance and accumulation, but being his first proper year in the system he could have plenty of upside for the future. Across the board he was consistent as they come. Gerloff was named in the South Australian Under-18 squad back in 2018 but did not end up playing a game, taking a while to develop, and now at 20-years-old is more prepared for the rigours of AFL football. Gerloff’s defensive pressure is heighted by the fact he runs a 8.020-second agility test. His 3.030-second 20m sprint is also impressive showing off his overall nimble movement despite his core strength. Gerloff booted a goal a game in 2019 and showed he could potentially play that half-forward role just as well as his midfield one.