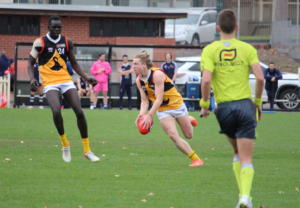 DRAFT ANALYSIS: “An electric small forward who kicks goals in bags and can take high marks, Weightman’s outstanding National Championships propelled him up draft boards into first round contention.”

ARGUABLY the leading pure small forward in this year’s crop, Dandenong excitement machine Cody Weightman enjoyed a stellar national carnival which helped him catch the eye of fans and recruiters alike. The Haileybury Collegian spent a large chunk of his year playing school football, but managed six NAB League appearances and all four Vic Country outings in between where he found some of his best form. His showpiece games came for the ‘Big V’ against the Allies and South Australia, booting four goals in each match to finish as the carnival’s leading goalkicker and put his name in lights. An archetypical small type, Weightman has most of the athletic traits that clubs desire and undeniable natural talent inside 50 on the ground, in the air, and around goal. A club with specific small forward needs would look no further than Weightman as early as in the first round, but he could also slide just outside of the first 25-odd picks.

The thing that best defines a player like Weightman is X-factor. Small forwards typically have it in spades and the Dandenong product is no different, providing a spark inside 50 to whichever side he lined up for this year. His most eye-catching passages come through his break-neck attack on the ball both in the air and at ground level, with Weightman using his outstanding vertical leap (83 running and 69 standing at the National Draft Combine) to take high marks and his smarts to navigate opponents when the ball hits the deck. From there, Weightman has great spatial awareness and while he is only relatively quick and agile, can find enough space to have a clean shot on goal. Endurance is also a deceptively good part of his game, with his pre-season yo-yo test score of 21.4 elite for his position (despite decreasing at the National Combine) and boding well for repeat efforts inside 50. Weightman’s presence then becomes two-fold, with his aggressive attack on the ball translating to defensive pressure – despite not having massive tackle numbers.

Those numbers of 1.3 in six games for Dandenong and 2.0 for Vic Country will need to lift at the next level, especially given he is far less likely at his size to get a run up the ground as he did late-on for the Stingrays. That is all a part of ticking each box in your best position first, before possibly transitioning into a different kind of player. Weightman wins good amounts of ball for a small too despite having the odd game below his NAB League average of around 15, with a good ratio between his contested and uncontested possessions. That points toward adding versatility down the line – having spent a short space of time in midfield late in the year for Dandenong – as well as consistently finding the form that saw him boot four goals in two of his national carnival games. At his best, Weightman is unstoppable inside 50, and has great upside in terms of developing into a player who can tear games apart each week.