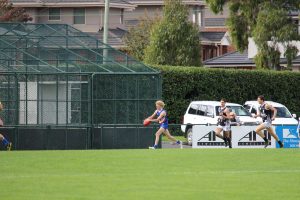 Cody Hirst is a player who was regarded as one of Eastern Ranges’ top prospects in 2018, but an injury early in the year, wiped out his season. He recovered in time to test at the Rookie Me Combine where he blitzed Stephen Hill’s agility test record, not once, but twice, with his third attempt just registering outside the record, but still finishing in the top five. Along with his elite agility, Hirst has all the defensive traits to make opposition defenders nervous. He has the defensive pressure – averaging 4.5 tackles per game – and a keen goal sense. He showed prior to his injury he was also flexible enough to play in defence, and that was enough to keep at least one club keen to earn an invite to the combine. He does not win a heap of the football, and he is as skinny as they come at just 61kg in the pre-season and 176cm in height, so he will need to build size and strength, but he has some good attributes to work with should a club select him.