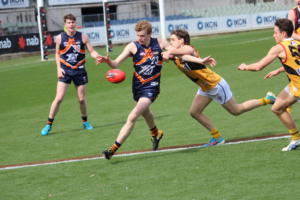 DRAFT ANALYSIS: “An athletic key defender tied to Essendon’s Next Generation Academy, Brand is ultra competitive and one of the most reliable stoppers in the draft crop.” – Ed Pascoe

Cody Brand would have to feel hard done by with the COVID situation in Victoria, as the likely Vic Metro full back would have gone head-to-head with the likes of Logan McDonald, Riley Thilthorpe and Jamarra-Ugle Hagan at the National Championships. Knowing the character of Brand, he would have been excited for that challenge, too. Unfortunately, things didn’t go as planned for him this year, but he still looks like a great defensive option in the 2020 draft. The Essendon NGA prospect was a mainstay for Calder last year, spending plenty of time at full back; taking on the opposition’s best key forward and often breaking even or beating them, which was terrific for a young defender in a position most glaringly exposed NAB League level. Brand’s Calder teammate Josh Eyre is also part of the Essendon NGA and both looked set for key roles this year for the Cannons and for Vic Metro.

Brand is a no frills kind of player in that he is not a high-flying intercept defender and does not dash out of the backline. What he does do is beat his direct opponent, competing well in the air and also at ground level. He has proven a very willing tackler and despite his lighter frame as a bottom-ager, was able to put his body into spoils while also standing strong to take marks going back with the flight.

Brand is a solid key defender but he has also played forward, where his standout performance came against Tasmania, kicking three goals and showing he can find the big sticks when given the opportunity. That should really help sell his potential versatility at the next level. He has the size and athleticism but with his competitiveness, he could certainly make a good case playing forward as well. Brand showed his worth as a stopper, playing on top 20 prospect from last year Sam De Koning and keeping the talented 202cm player goalless, which played a big part in Calder’s elimination final victory over the Dandenong Stingrays.

Brand is not a huge intercept marker and certainly not at the level of someone like Denver Grainger-Barras in that department, but when he does go for his marks he often makes them stick by judging the ball well in the air and taking it cleanly. This is an area he could work on to show off his offensive traits and with the frame he is building, he may be able to take contested intercept marks instead of spoiling most times. Brand could really do some damage if he played a more offensive style, with his long kicking a real weapon at times. He is a booming right-foot kick and can certainly clear defensive 50 with ease. He does not mess around and try to take too many players on, which can be a good thing. When a handball is there, he will take it straight away and if not, he will clear the ball with a long kick – a method which certainly works for him.

Brand moves reasonably well for a player at 196cm. He seldom trails quicker players and can keep up with them on most occasions, even up the ground. He has a decent leap which allows him to take on forwards that are a bit taller than him, and he will find plenty of those types at the next level. Brand is still rather light, though has filled out to 87kg and is working on his contested craft. His physical development and game development still has a lot of room to grow, and that talent should be further enhanced in an elite environment.

It is that development that will make it hard for him to play much senior football next year. He will eventually need to play on the opposition’s best key forward and his body has a lot of development left to be able to take on monsters like Charlie Dixon or pure athletes like the King twins. Brand will likely spend his his first few seasons developing his body and game in the reserves.

Brand’s production last year was likely on par with most bottom age key defenders, and it is certainly something he could improve for the future unless he becomes a pure stopper. Brand averaged just under eight disposals per NAB League game, so he could definitely try and find a balance between attacking and defending. An average of two marks a game could also be improved upon.

Like many developing talls, Brand’s true draft worth would have been proven in his top-age year and with that opportunity taken away, he has the potential go lower than he might have if he got to play this year. His selection in the Under 17 Futures All-Star game in 2019 and selection in this year’s AFL Academy shows he has the interest of numerous club, and for a club looking for their next shut down defender, you wont find many better options in the 2020 draft than Brand.