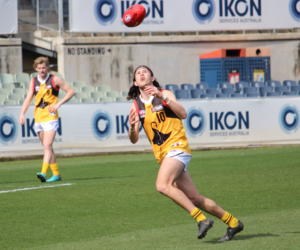 DRAFT ANALYSIS: “Gay is a natural footballer who has proven himself a versatile type as far back as the last line in defence, or deep forward”

Clayton Gay is one of the most versatile talents who can play in defence or up forward, and once he builds his endurance further, could slot into a midfield role if required. He has the skills, footy smarts and ability to read the play as some of his strengths, with his consistency needing to iron out, as well as improving some of his athletic areas which are the knock on him in the modern game.

Dandenong Stingrays Talent Manager Darren Flanigan described Clayton Gay as a “natural footballer” at the preseason testing, and it is easy to see why. In a world where the football debate rages over the footballer against athlete, Gay is heavily weighted on the former. He has the talent and tricks you can rely on as a player whether it be deep in defence or attack, or roaming around the ground, but just lacks a tank and will not have the eye-catching breakaway burst that others have. He did add six kilograms to his frame from the 2019 to 2020 seasons, showing how hard he is willing to work to improve.

In terms of his athletic ability, in the preseason he had just the 20.3 on the yo-yo test and 3.27 seconds on the 20m sprint which he conceded “was just not his day” when he spoke to Draft Central in the preseason. He might not be an elite athlete but Gay has a lot of upside and averaged 61.2 per cent by foot in the NAB League last year, off a contested possession average of 46.3 per cent. Given most of his touches were often under pressure – not only just in contested situations – such as on the last line of defence, he did well to generally make the right decisions.

He is not a huge ball winner at 12.5 disposals per game, but then he did not play that running half-back role, rather that deep defender who could be tasked with the duties of kicking long out of defensive 50. It was these games where he generally performed stronger, having three games of 20 or more disposals, but also seven games of single-digit disposals. Many players have been robbed of trying to impress in their top-age year, but Gay is one who really could have staked his case in 2020 with a number of his areas able to be worked on throughout the season.

As a whole, Gay is a player who can control the airways despite not being overly tall at 183cm, but his best work is done at ground level where he can make sound decisions by hand or foot getting out of trouble in defence. His work in the back pocket is arguably his best role, and while he could well end up in the midfield over time, he has the versatility to work his way into a number of spots on the field. The knock is the athleticism and consistency, but in terms of pure footballing ability, Gay has it and is one player you can trust with ball-in-hand.

It is tough to calculate just where Gay falls on draft night, because with the reduced list sizes, nothing becomes a certainty. He has put the runs on the board over the past couple of years to show he deserves a spot, and could be given a chance in the second half of the draft where his natural football knack would impress some clubs enough to overlook his current athletic shortcomings.