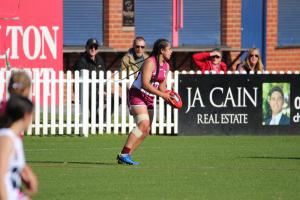 Christine Okesene is a natural leader who captained Queensland at the AFL Women’s Under 19 Championships this year. As a top-ager who missed out on being drafted last year, Okesene has been able to get some good football under her belt for her state and Yeronga State Brisbane in the QAFLW, returning from an anterior cruciate ligament (ACL) injury.

Christine Okesene has a number of draftable traits, both on and off the field. Captaining the Sunshine State at the national championships, Okesene is viewed as a player that coaches and teammates know exactly what to expect each and every game. She can play on multiple lines with great versatility, and her work rate and defensive pressure is also immense, which is why she traditionally roles off half-back.

Okesene’s greatest offensive weapon is her powerful boot, which she uses to hit targets down the ground at great distance. She shows great courage when going out there, and is able to compete both aerially and at ground level with fierce aggression at the ball carrier. As Queensland’s most prolific top-age player, Okesene earned and AFLW Draft Combine invite for her season, which included 15 disposals, five tackles and four rebound 50s at the AFL Women’s Under 19 Championships against Vic Country.