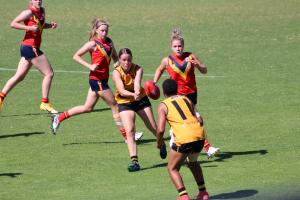 Chloe Reilly is a small utility who plays well above her 163cm height. Capable of playing at either end, Reilly has a number of impressive traits that lend her to predominantly playing forward, but also capable of her competing as a defender. The East Fremantle youngster has shown some promising signs over the past couple of years.

Having played predominantly as a forward last year, Chloe Reilly has been able to expand her versatility to include defence in 2021. Whilst she has arguably had the greater impact inside 50, her ability to read the ball in flight and possessing strong hands and a penetrating kick make her ideal to play in both roles. When seeing her play and then reading her height, one has to do a double-take because she can compete against much taller opponents’ credit to her safe hands and vertical leap. She can take a big grab and do it by either leaping up or out bodying opponents.

When playing forward, Reilly is a player who can hit the scoreboard in multiple ways, be it via the lead and mark, or in general play, knowing where the goals are and how to put them through the middle. Whilst her endurance is an area of improvement, which will also aide in her consistency, when Reilly is on, she is really on. It is bridging the gap between her best and worst, and the fact she can slot into multiple roles makes her a handy asset for each team. As she has shown for East Fremantle, she can play at both ends wherever they needed her.

When looking forward, Reilly projects as a forward because of her marking, kicking and overall goal sense, as when she does not take the mark she brings the ball to ground. Once she can increase her tank, she will be able to impact for longer, and even potentially push for a midfield role in the future.

“When you watch Reilly for the first time, you do a double-take at the listed 163cm height, because whilst she might be smaller than her opponents, quite often she is able to either leap higher than them, read the ball better than them, or clunk grabs better than them. Her one-on-one ability is quite impressive as is her overhead strength. Couple these traits with her powerful kicking, and Reilly has enough about her to suggest she could play at either end, which she has done this season at WAFL Women’s level for East Fremantle. Primarily a forward though, Reilly has great aggression at the ball and does not take a backwards step, almost having the chance to win the game for Western Australia against Vic Metro after the siren, and whilst that did not work out, Reilly still had a solid carnival, booting two goals and averaging 11.3 disposals, 2.0 marks, 1.7 inside 50s, 2.0 rebound 50s and kicking a couple of majors in an all-round effort.” – Peter Williams via “2021 AFLW Draft Positional Analysis: Tall/Medium Forwards”

“Reilly cracked in hard all day, even though she was thrown around positionally, she was not allowing that to impact her performance across the four quarters. Won a lot of the inside ball and followed up with long kicks forward, to the advantage of her forwards or to spots that WA players were at, showing her understanding for the WA structure. ” – Declan Reeve via “Top Performers: 2021 AFLW U19s Championships – Thursday, April 15”

“Much like Franklin, Reilly is a versatile talent who plays far taller than her 163cm might suggest. At first glance at her style, Reilly looks 170cm-plus easily with her competitiveness in the air, strong hands and fearlessness to have a crack at anything. Building her consistency across games, Reilly’s best is incredibly eye-catching and she can pull some some good marks – quite often on the lead with some nice pace – or snap goals out of nothing. Having spent time bulking up over the summer, Reilly is prepared for a big carnival against any opponent thrown her way, and has been deployed up both ends this season after plying her trade as an exciting forward last year. A powerful kick who is reliable with her set shots.” – Peter Williams via “2021 AFLWU19 Championships state preview: Western Australia”

“Having split her time up both ends in recent weeks, Reilly was a more permanent forward in Round 4, looking lively and creative when around the ball. Her first flying shot on the run went out on the full, then tried to pull down a one-handed mark but could not quite do it. Shaking off a Melisha Hardy tackle in the second term and pumping it deep, Reilly had a number of chances but could not quite strike it right with a shank on the run 20m out and then a set shot following a good mark just falling short. The latter still led to an Evie Gooch goal, whilst Reilly’s supreme footy IQ and hard running saw her beat everyone to the ball” – Peter Williams via “Top Performers: WAFL Women’s Round 4 – Peel and Swans maintain top two spots”