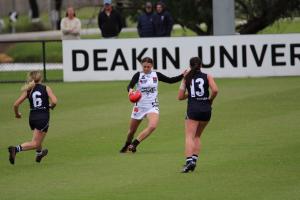 Chloe Leonard is one of a number of top-age talents in contention for the AFL Women’s Draft after an ultra-consistent NAB League Girls season. With solid traits across the board, Leonard is a natural leader and her balance of offensive and defensive traits come to the fore.

A leader at the GWV Rebels, Chloe Leonard is a versatile prospect who can play off half-back or through the midfield and have no troubles finding the football. Already at VFLW level for the Geelong Cats, Leonard has proven to acquit herself well against more senior and experienced opponents. Her consistency all year has been hard to match from other players, and Leonard has hardly put a foot wrong. The big thing with Leonard is the gap between her best and worst is minimal, making her a really safe prospect.

Leonard noted her greatest strength in preseason as her kicking, and she is a reliable user of the ball. Be it off half-back or in the middle, Leonard can hit targets under pressure and more so when with time and space. If she does miss a target, expect her to get over and provide an extra number to mop up and win the ball back, as she so often mops up in the defensive 50 for her teammates. Her leadership by example is admirable, and her ability to get around her teammates and bring them into the game also noticeable.

Overall Leonard ticks a lot of boxes across the board, and whilst she is not overly quick – an area she noted needed improving in preseason – or has a particularly penetrating kick, she does not make many mistakes, and when a player is winning as much of the ball as Leonard is, then being able to dispose of the ball cleanly is paramount. With her balance of offensive and defensive traits, Leonard is a prospect you can rely on.

“Chloe Leonard’s a big one,” Smith said. “She’s played three games for us, we love Chloe. It’s just the good vibes she brings, she’s so confident but she just asks questions and is always wanting to learn. “You give her something to do and she just does it, plays her role so well.” – Breanna Beckley, Geelong deputy-vice captain via “PREVIEW | 2021 VFL Women’s Finals: Week One”

“As safe a player as you could find, Leonard’s 2021 season was consistency bonafide. She hardly put a foot wrong all year for the GWV Rebels, averaging 19.4 disposals, 2.4 marks, 7.1 tackles and 4.0 rebound 50s playing between half-back and through the middle. Possessing courage and a hard edge with a high work rate, Leonard kept cracking in for four quarters every game and was amongst her team’s best players regular. A 2002-born talent who missed out last year, Leonard certainly stepped up this season, and has already made her VFLW debut, and looked good out of defence for Vic Country with 4.7 rebound 50s to go with 14.7 disposals and 5.0 tackles.” – Peter Williams via “2021 AFLW Draft Positional Analysis: Tall/Medium Defenders”

“The consistent Rebels ball magnet has hardly put a foot wrong in the 2021 season, also choosing to represent Geelong in the VFL Women’s, and made her debut against the Southern Saints. Able to win the footy across those competitions as well as the AFL Women’s Under 19 Championships, Leonard laid a massive 7.1 tackles per game across nine matches in the NAB League Girls, as well as 19.4 disposals, 2.4 marks and 4.0 rebound 50s, playing between defence and midfield, often mopping up and clearing the ball from danger. An ultra-consistent player where you know exactly what you are going to get each match.” – Peter Williams via “Ones to Watch: AFLW Draft – Victorian top-age talents”