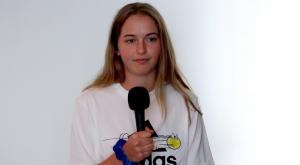 Charlotte Thomas has had an injury interrupted season in 2021, only playing the one game for Subiaco, but being a member of the AFL Women’s Academy, has shown more than enough in the lead-up years to suggest she could be a seriously talented player at the top level.

The West Australian midfielder has not been able to show her wares in 2021 after building an impressive CV over the past couple of seasons. Coming through the WAFL Women’s competition with Subiaco, Thomas is known for her ball use and clean hands in traffic, as well as being able to read the play and know where to go. She has that natural footballing ability that is evident in the way she plays, and whilst she might not have had much of an opportunity to showcase that in 2021, the fact she was already an AFL Women’s Academy member proved she has caught the eye of plenty of people.

In speaking to Thomas at the AFL Women’s Under 19 Championships, the teenager said she valued her ability to read the play, win the ball and dispose of it well by hand or foot. She can hit targets under pressure, and shows a good combination of decision making and composure. Her key improvements were her strength and endurance, having had to spend most of 2021 recovering from a wrist injury sustained at the start of the season. If fit, no doubt Thomas would have helped Western Australia at the AFL Women’s Under 19 Championships, and been a key player through the state side.

Looking forward, once Thomas is able to get back into action, keep improving her tank and her strength, she will be able to compete against stronger players and have a cleaner run at it. She has the natural footballing abilities and upside that could see her improve quickly, and there is little doubt that despite not getting out on the park, Thomas will be held in high regard by the West Australian sides.

“It’s (WAFLW) been really good. “Down at Subi, all the AFLW girls there, really good experience training with them and playing a couple of games with them. A really good club down there.” – Charlotte Thomas via “Thomas well supported during injured season”

“Another player to keep an eye on is Subiaco’s Charlotte Thomas, with her ball use sublime playing off half-forward. She is so clever around goals and can hit the scoreboard, but also push up the ground and have an impact as well. ” – Peter Williams via “WAFL Women’s to return on February 20”

“A dangerous forward half player with clean skills and a nous for goals, Thomas is the other AFL Women’s Academy member from Western Australia in her middle-age year along with Rowley and has a big future. Playing in an experienced team like Subiaco, Thomas was able to still stand out, regularly hitting the scoreboard. Standing at 175cm, Thomas has good size and good hands and having made her League debut in 2020, big things are predicted for 2021 with a lot of AFL Women’s talent, and more experienced heads around her.” – Peter Williams via “2021 AFLW Under 18s Ones to Watch”