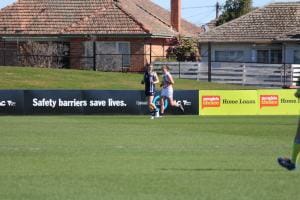 DRAFT ANALYSIS: “A natural footballer who can be very damaging inside 50 with his smarts and goal sense"

Charlie Sprague is one prospect many draft watchers may not have seen much of until the last month of the season, but as we saw in his bottom-age year and in the opening couple of rounds, the Geelong Falcons medium-tall forward is a consistent threat inside 50 due to his natural football ability that is evident when you watch him. He is not the best athlete that can run 20m in sub-three seconds, or break record vertical jumps, but he is a player that just knows when and where to lead, and when to take his chances, or opt to pass to a teammate in a better position. His goal sense, game smarts and set shot goal kicking is consistent, as is his ability to just get to the right positions. The question marks are over his athleticism and endurance, but all are areas that can be improved on at AFL level. After all, he is not slow, he just is not unbelievably quick. It is an area that is unlikely to hinder him with the role he plays anyway. He outsmarts his opponents rather than outruns them. It is hard to judge where he sits in the pecking order, but a mid-to-late draft projection of the third round onwards seems about right for the talented forward.

Sprague is a unique pick in this year’s crop, because he is just a natural footballer in the way that he plays. At 187cm, he is that medium tall who plays taller than his height may suggest. He can read the flight of the ball coming into the forward 50 and pick the right gap to slot into and lead. Knowing he is not the fastest player out there, Sprague picks his lead and makes sure his hands are out in front to take the strong mark. He also has the ability to make half leads, where he does not lead until later and then with a quick dart is able to compose himself and clunk the mark.

The Falcons forward is just as capable at ground level and can create goals or scoring opportunities out of very little. Against the Calder Cannons at MARS Stadium in the Wild Card Round, Sprague set up a crucial goal by not taking possession under pressure and instead tapping it in front of Ned McHenry to run onto and kick a goal. In doing so, Sprague blocked his direct opponent to give his teammate more time and space as well. A second show of his smarts came not long after when he cleanly picked up the ball and rather than blazing away, neatly chipped over the top of an opponent to the loose Jay Dahlhaus 15m out who converted the goal from an easy set shot. It is these one percenters that will not be seen on a stats sheet, but are integral to the success of a forward line set-up.

When it is his time to stand up, Sprague is a reliable set shot for goal, kicking through the ball from long distances and the ones he misses are often posters or just to either side rather than a technical problem. More so he brings teammates into the game, sitting equal third on score involvements (goals, behinds and score assists) after the opening few rounds prior to school football.

The areas of improvement for Sprague to develop is definitely on the athletic side of his football. He recorded 3.1 seconds (20m sprint), 8.7 seconds (agility test) and 62cm (standing vertical leap) in the pre-season testing and these are all areas Sprague can improve on. Without smarts, they might be a concern, but Sprague’s natural football ability – not too dissimilar to Gryan Miers‘ last season – overrides his lack of athletic traits. Likewise, his endurance is also an area of improvement, and having been out for most of the season, no doubt one aspect Sprague would love to improve with a full pre-season under his belt at AFL level.

While Sprague has not had the chance to shine at the National Under 18 Championships due to a finger injury and missed a large portion of the season due to it, he gave recruiters glimpses in the final two rounds with his natural forward craft and smarts to get to the right positions and have an impact both with and without the ball. There is not too many medium-talls in the draft crop with the equal smarts of Sprague, and while he might not have the athleticism of some of the others, he makes up for it in pure nous and could be a long-term prospect for an AFL club wanting a third tall target.