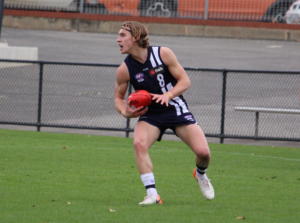 DRAFT ANALYSIS: “Lazzaro is a consistent inside midfielder who showed his wares in his bottom-age year, while possessing some elite agility”

Charlie Lazzaro is a strong inside midfielder with a nice blend of agility and endurance that really shone in his bottom-age year for Geelong Falcons last season. Whilst he was unable to go on with it this year, and therefore test out his versatility and build extra size for on-field competition, Lazzaro has put himself in a great position to be picked up in the AFL Draft this year.

Lazzaro has multiple elements about his game on his side, but his greatest strength is his inside ability. He can win the contested ball and lay plenty of tackles, whilst having the athleticism to get himself out of trouble. Not a natural straight-line burst runner of sorts – reflected in his 3.10-second 20m sprint preseason testing result – he boasts an elite change of direction, recording a mind-boggling 7.79 seconds on the agility test. He also has top-level endurance which sees him run out games, and between the two, his power running and side-stepping ability enables him to cause plenty of headaches for opponents and would-be tacklers.

For a bottom-ager, Lazzaro had no trouble adapting to the speed of NAB League football, averaging 20 disposals across eight games, whilst also averaging 4.1 clearances, 4.1 tackles, and running at 45.8 per cent contested rate. As an inside prospect Lazzaro is well balanced across the traits he needs, with the major question mark coming on his versatility, which is something he had hoped to improve in season 2020. One role he wanted to play for the Falcons was as a small forward, as he stands at 179cm and 74kg as of the preseason this year. Few inside midfielders consistently perform at that height in the AFL, which means he could end up being that pressure forward who can work his way into the midfield in stints.

One unquestionable trait that has nothing to do with his on-field ability is his natural leadership and character. Without a doubt, Lazzaro is one of the most switched-on and well-spoken players going around. He has plenty of goals not only on the field, but off it, and has a high work ethic as well as a great work-life balance that he spoke of in the preseason. One of the most popular players among his teammates, Lazzaro is sure to adapt to life at the top level without any problems, and to go with his natural football ability, he is someone who could thrive in an elite environment.

As an overall prospect, Lazzaro has a good blend of traits he needs for the right role, and whilst he could increase his speed a touch, it is not a major factor due to his high-level agility. It would have been better for him to show off his versatility and add more size to his frame to compete against the bigger bodies at senior level, but he has not had the chance. Lazzaro certainly deserves the opportunity at the top level and being the character he is, it is unlikely he will ever let anyone down through lack of effort.