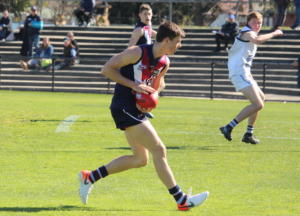 STARTED the 2019 season like a house on fire and genuinely pushed himself up as one of the top key position forwards available in the AFL Draft. Unfortunately he did not have the championships he would have liked for Vic Metro, and was eventually sent back to defence for Sandringham to build his versatility, showing he can play at either end, but is still a promising forward. He was much-loved by the Dragons’ coaching staff for that facet of his game, taking on the more selfless defensive roles of his bottom-age year while still having an impact when swung back forward – as shown in his two-goal effort against Geelong in Wildcard Round. Building more consistent form and adding greater athleticism to his footy smarts will be the next step for Dean, who is high-level at his best.