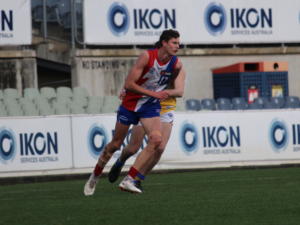 DRAFT ANALYSIS: "A contested marking forward and ruck, with a nice vertical leap who backs up his good work at ground level."

ARGUABLY the second best ruck option in the 2019 AFL Draft crop, Comben has some nice athletic traits which he puts to good use rotating between the ruck and key forward. Standing at almost 200cm, Comben is more mobile than most his size, and more importantly, can have just as big of an impact at ground level as he can in the air. He is strong overhead, good at ruck stoppages and has a nice vertical leap. He still has to work on his endurance and consistency within games to take his development to the next level, but that is not a surprise considering taller players traditionally take longer to develop.

Comben is one of those talls who has experienced a growth spurt in his latter years. It has helped the leaner tall develop with athleticism and grow into his size, still being a contested marking forward and around the ground, while providing support for his midfielders and small forwards at ground level. In particular, his work at stoppages is impressive because he will often tap the ball down and if it is sharked by an opponent, will attempt to either tackle or provide pressure for a teammate to come in and win the ball back. Unlike many rucks, Comben could genuinely develop as a key forward first, and pinch-hit in the ruck if required, playing that second ruck role perfectly. Many AFL clubs would love to have the flexibility that Comben offers, because he not only could play that role, but he is good enough that if injury was to strike to the number one ruck, he could easily step up and take the ruck’s place.

If we delve into areas of improvement, it is no surprise to see consistency as a major feature of Comben’s development, still looking to build on his impact across four quarters and game to game. He has high upside and at times – such as the game against Tasmania Devils at Box Hill later in the season – showed he is capable of turning a game with a few crucial contested marks inside 50s. The reason his consistency might waiver at times is due to his endurance base which is building. Again, like many talls that are coming through the system, this is no surprise, and Comben’s 20.3 yo-yo test at the National Draft Combine shows an area of development. There are some talls that are better, but many that are worse, so he is far from the lowest point of endurance, but still an area he can build upon. If you look at Comben’s ability to clunk marks at the highest point, and if he drops it, back it up with second efforts, then the Gippsland Power big man provides a presence wherever he goes. While he was always one who was likely to be considered a long-term development for an AFL club, Comben has taken big strides in his top-age year and cemented himself as a genuine first half of the draft chance, especially in a year where rucks or key position players in particular, are hard to come by.