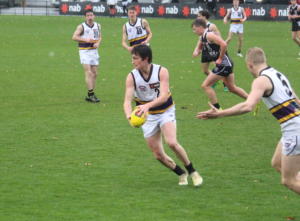 DRAFT ANALYSIS: “Byrne is a talented defender who can play just about anywhere and possesses some similar traits to his mentor, Lachlan Ash” – Peter Williams

Charlie Byrne is one of the value pick-ups in this year’s AFL Draft. While much of the talk around the Murray Bushrangers’ AFL Draft prospects has been centered at Elijah Hollands – and rightly so – Byrne is a player who could provide some great value later on in the draft. He did struggle with consistency at times in his bottom-age year and has some areas to work on, but is one of those natural footballers with a penetrating left boot and an ability to run off half-back.

Byrne is aligned to the Allies having come from New South Wales, but is not aligned to either Academy. Byrne’s bottom-age season had some highs and lows in terms of his performances, but he managed to play every game and finished the year with 15.1 disposals per game. What makes that more impressive is the fact he had games of five, nine and nine disposals to start the season, and then did not dip into single digits again, hitting 20-plus disposals four times.

Some of his best games came against Tasmania Devils in Launceston, and Western Jets in Wangaratta, where he averaged 22.5 disposals and 5.5 rebounds, where he ran at an elite 77.8 per cent efficiency. At times he could bite off more than he could chew taking those risky kicks throughout the season, but like his mentor Ash, he had the licence to do so with his penetrating left foot.

What makes Byrne such a good prospect is his high impact-per-possession game, where he can provide run and carry off half-back. He does not possess the elite breakaway speed that Ash did, but he does have that nous to look composed with ball-in-hand. He was a strong interceptor and rebounder in the back half for the Bushrangers, and while he did not end up playing a game for the Allies, would have been a monty this season to do so.

Byrne does have the areas to work on such as his consistency and his defensive game. For a player that still won 42 per cent of his possessions in a contested situation, Byrne only laid the 1.7 tackles per game at NAB League level. He is not a huge tackler, but what he offers on the offensive end is the positives in his game. He just needed to show it more consistently, though at his best he is more than capable of making it at the next level.

Byrne is a player who is in the mix for a late selection which is why he provides good value. His glimpses during his bottom-age year showed he could progress as a damaging half-back/wing, but his finishing ability enables him to play forward as well. It is a tough year for AFL draft prospects, but Byrne is an underrated player who presents value with his upside and hurt factor.