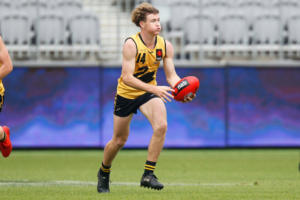 DRAFT ANALYSIS: “A hard-working medium-sized midfielder who thrives on the contested side of the game.”

THE Willetton Junior produced an outstanding season of football that has seen him rise up many draft boards. An inside midfielder similar to West Coast’s Jack Redden, Warner is hard-working, thrives on the contested side of the game, has good skills and is defensively sound. While he does not boast explosive speed, Warner has shown an ability to get from contest-to-contest, often throwing his body around like a battering-ram to win the hard ball for his team.

Throughout the year, Warner showed off his excellent contested work, often winning the hard ball before distributing it to his outside runners. As well as showing off an excellent offensive skill set, Warner demonstrated a desire to be an excellent two-way player, showing off a ferocious attack on the man with the ball to win it back for his team.

Despite being neat with ball in hand, Warner doesn’t have as much finesse by foot. However, once he is in an AFL environment, this aspect of his game should improve. He may not have the penetration in his kicking, but Warner has also shown an ability to be effective and damaging with his handball ability, often opening up the play for his team from stoppages.

Compared to some other midfielders in the draft pool, Warner does not boast the same explosive athleticism as some other midfield prospects. However, he did test well at the National Combine in the 2km time trial (6:29 minutes), the and yo-yo test (level 21.6),

What is evident is that Warner plays to his strengths; a handy skill to have in an AFL environment.

DRAFT RANGE: Third to Fourth Round