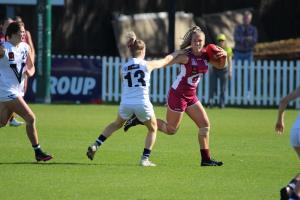 Casey Wynne is a member of the Gold Coast Suns Academy, and was compared to Shannon Campbell by Queensland State Talent Manager Mark Browning. A competitive one-on-one defender, Wynne has had her fair share of injuries in the past, but has shown great resilience to compete at the AFL Women’s Under 19 Championships.

Casey Wynne is a rock solid last-line defender who is able to match it with opponents one-on-one in the air and out-body them with good strength and smarts. Strong overhead, Wynne is a player who is rarely beaten and one who could be a long-term defender of an AFLW club. Able to pull down some strong grabs or defensively spoil opponents, Wynne is aiming to build her offensive output in the future.

Overall, Wynne is a player who at 177cm, has the size to compete with talls and smalls, having the 13 disposals and three marks for Queensland against Vic Country. Not a huge ball winner or rebounder, Wynne is best at negating her opponent and winning each contest, which she does well despite being under pressure. Having showed plenty of adversity to return from injury, Wynne has been putting some strong form together over the past few months.