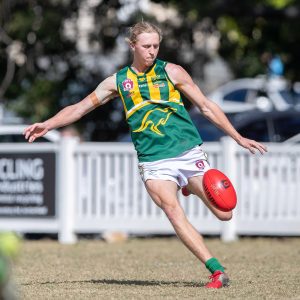 DRAFT ANALYSIS: “Michael is a classy mover with a booming left-foot kick that will be a major weapon for the years to come.” – Tom Cheesman

Carter Michael is a Brisbane Lions Academy prospect who impressed during the Academy Series, and for Maroochydore’s senior QAFL side this year. He looks to base his game around Marcus Bontempelli given his comparable height and mobility, but he played more of a Daniel Rich-style role in defence this season with his ability to accumulate and gain meterage on the rebound. The youngster looms as a likely selection for the Lions in the 2020 AFL Draft.

Michael’s greatest strength is his kicking, especially coming out of the back half. He has magnificent range and rarely misses a target. His ability to keep his kicks flat is exceptional, as this ensures they reach the target quickly and are difficult for the opposition to intercept. Michael is willing to bite off risky kicks through the corridor, which open up the game for his side and launch fast attacking play. From kick-outs, he usually goes long to clear the area and comfortably gets the ball 60 metres away from defensive goal. In general play, Michael works hard to facilitate switches and provide an attacking option for teammates. He gets handball receives on a regular basis because his teammates want to get the ball in his hands.

A prime example of this was in Round 9 of the QAFL against Surfers Paradise, when he kicked two goals from outside 50 in the first quarter. Both these goals came from handball receives from teammates who were confident that Michael would have the range and accuracy to deliver on the run from outside 50. Listed at 188cm, Michael is a great size for a half-back flanker. He does not play tall or take many intercept marks though, and these are elements of his game that should improve as he gains more experience.

Michael has fantastic speed for his size, so he is able to break away from opponents and provide run and carry through the middle of the ground. Sometimes his hard running goes unrewarded, but he does not let this bother him and continues to create an attacking option. Throughout the season, Michael also spent some time in the midfield and showed very promising signs. He won his share of contested ball, rarely fumbled, positioned himself well, used quick hands to release teammates, and applied strong tackling pressure. His combination of size, speed, composure and ball-winning ability can make him very difficult to stop. There is no doubt that he could become a midfielder at senior level once he develops some more strength. He also has great balance in that area, able to play both inside and out.

Michael and Morningside’s Blake Coleman are arguably Brisbane’s two strongest Academy prospects in this year’s draft, and they both should be selected in the middle to later on in the draft. Brisbane has plenty to deal with given the strength of its Academy system, but Michael would be a higher up priority, though as we saw with Noah Cumberland and Will Martyn landing at Richmond last year, sometimes other clubs have valued them higher and could snare a quality player from the Northern Academy system.