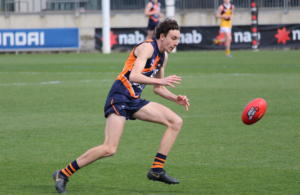 DRAFT ANALYSIS: “Edwardes is a tall utility with clean hands and skills, who suits the modern game in his ability to play just about anywhere.” – Michael Alvaro

As an Under 16 All Australian in 2018, Campbell Edwardes has long been on the AFL radar. His potential as a 195cm-plus prospect who fares just as well at ground level as he does aerially is a large part of that, as well as his versatility to play on each line and in a range of roles. Since his breakout carnival, the Calder Cannons prospect was selected in the Under 17 Australian side and represented Vic Metro at the same level in 2019. He managed 10 bottom-aged NAB League appearances in between representative commitments and school football with PEGS, meaning the 18-year-old had plenty on his plate. Edwardes was also included in the 2020 Vic Metro Academy Hub intake, which in-part helped him earn a National Combine invite, despite not testing at the event.

Much of the hype surrounding Edwardes’ game has come from his unique versatility. At 196cm, he measures up at key position height but plays more like a medium type who can impact the play aerially or at ground level, where his clean hands come to the fore. Edwardes is also a well-skilled talent, able to hit targets on his favoured side when on-song and help chain transitional play for whichever side he represents. Across his 10 NAB League outings in 2019, Edwardes was mostly utilised on the wing, though his marking value was also seen at half-back. In 2020, he was poised to continue to remain versatile, not resigned to locking down a specific role. Whether it was on the inside, outside, or up either end, Edwardes was ready to show his wares in whatever way he could.

Unfortunately, like his fellow Victorian hopefuls, Edwardes was not able to showcase such traits and his development in them as a top-ager. It is especially unfortunate for a player like Edwardes given the scope of improvement he has left, and there was plenty he had to give in 2020 to consolidate his standing as a true prospect. Part of that is his consistency, which by his own admission in preseason is a key improvement area. An output of 9.1 disposals and 3.1 marks per game is not entirely poor for a bottom-ager, and Edwardes is quite capable in possession. Although, he would want to turn those glimpses of form into more consistent showings throughout games and the season as a whole.

Another area of growth is his strength. Edwardes is still quite lean at 81kg, which perhaps lends his versatility, but a larger frame would more significantly aid his aerial game given his 196cm height. Possessing such clean hands and good reading of the ball in flight, Edwardes could be a force in the air around the ground. He also has a handy vertical leap, measured at 63cm standing, and up to 82cm running during the preseason. Further developing physical attributes such as his endurance and explosiveness would also help him become a more well-rounded and consistent figure, thereby boosting his draft stocks.

Overall, what you get from Edwardes is plenty of potential. He has shown in patches thus far that he has plenty of desirable traits, but is not yet the complete package. 2020 would have been the year to prove as much, building on the key attributes like his clean hands, vertical leap, neat skills, and versatility to really take ahold of the Under 18 competition. Alas, by no fault of his own, Edwardes’ true ceiling remains somewhat of an unknown, but he is a player well-known to recruiters given the runs he has put on the board throughout the elite talent pathways.

Edwardes seemed to really be looking to accelerate his standing in 2020 with a consistent season, which could have boosted the current projection of late-rookie. Players such as Nik Cox and Zach Reid, who are also over 195cm and possess great versatility, have been pegged as first round talents, so that is the level Edwardes would have liked to get to. He is less of a key position prospect than that pair, though and has a few more areas to refine. He could be one to prove his worth in the extended Under 19 NAB League competition next year, though clubs may take him on in 2020 with hopes of helping him develop over time. He remains a long-term project player.