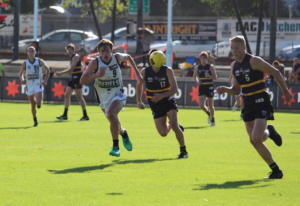 A workhorse through the midfield, Cam Wild switched to the Murray Bushrangers from Northern Knights this season after his family moved to Shepparton. He earned Vic Country honours and racked up the ball at will, with the Bushrangers’ onballer being a consistent force all season, credit to his high work rate. Eligible for Carlton under the Next Generation Academy, he could not have done much more in 2019. This year Wild averaged 23.8 disposals, 4.3 marks and spent considerable time on a wing, particularly in the second half of the season using his running power to outlast his opponents. His disposal could improve and he could hit the scoreboard a fraction more – booting eight goals from 13 games but three of them came in the final three weeks. Wild is a hard worker with a cracking attitude that will see him push himself to the limits as shown on game day. He will fill any role given to him, and Wild keeps finding the ball and earned a spot with Vic Country to play two games – averaging 15.0 disposals, 4.5 marks and 2.5 tackles per game.

DRAFT CENTRAL’S INTERVIEW WITH CAM WILD AT THE 2019 ROOKIE ME DRAFT COMBINE: