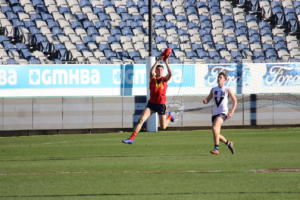 DRAFT ANALYSIS: “Cameron Taheny is a crafty medium forward, with superb marking skills and many traits to impact straight into the AFL level.”

THE 2019 season saw Eyre Peninsula-born Cameron Taheny impact at every level he played in. Taheny competed in First XVII with Rostrevor College, a SANFL Reserves premiership and League debut with Norwood, and also the Under-18 National Championships with South Australia. He made his SANFL league debut in Round 2 against Port Adelaide, and stunned with a fantastic performance kicking three goals. Taheny continued to kick goals with regularity – booting 15 goals in four games – and exhibited his brilliant goal sense and ability to take strong contested marks at senior level, he finished with 25 goals for the season across both grades. Taheny can make an impact immediately in his first season at the senior AFL level and is able to play a role as a pressure forward early in his career with the aim to move into a midfield-forward split role in the future.

Similarly to SANFL and state teammate Dylan Stephens, Taheny has been able to showcase his ability to impact at the senior level. The talented forward with huge upside was able to hit the scoreboard with incredible efficiency kicking 15 goals in his first four senior games for Norwood, A highlight of his game so far is his direct nature to attack the goals in the forward 50, outlining his instinctive decision making in front of the big sticks. The main attribute that Taheny has been recognised with so far in his career is his great marking ability, particularly his strong overhead marking. At the National Draft Combine, Taheny impressed with his elite speed by breaking the three-second barrier in the 20m sprint. Taheny has also been discussed as a potential leader with brilliant leadership qualities both on and off the field. He was elected as Head Border at Rostrevor College for his final school year and has become the voice of for dozens of boarder classmates from remote and regional South Australia. With terrific speed, strong overhead marking, an innate goal sense and great decision making, Taheny has all the makings of a quality forward once he can piece it all together at senior level.

After bursting onto the scene at SANFL level, Taheny was dropped from the senior Norwood side leading into the SANFL Finals. Taheny struggled for consistency after sustaining a groin injury against Western Australia at the Under-18 National Championship and will be hoping to rectify any consistency issues in his first AFL season. So far in his career Taheny has been mainly deployed as a medium-forward and has not had the opportunity to regularly play through the midfield, which he has every capability to do so in the future. So the two key areas for Taheny to improve is his consistency and versatility. The top 30 prospect could easily be a permanent forward at AFL level, and perhaps play a role similar to Jamie Elliott with his ability to do so much damage deep or higher up inside 50. He might still have to build those areas of consistency, but when it comes to his upside, there are few players in the AFL Draft crop that could have a higher scope than Taheny who showed in his eight-goal haul from 24 disposals last year in SANFL Under 18s, that in the right circumstances, can tear a game to shreds. He is a player that fans will enjoy watching in the years to come.