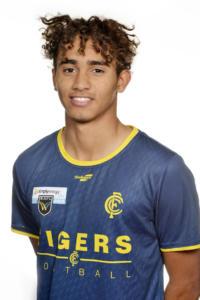 A DARING, running midfielder/defender, Anderson is only slight but unfazed by playing against bigger opponents. Despite needing to build his endurance and add extra weight to his frame at just 61kgs, Anderson has some neat outside traits that catch the eye. His 2.879-second 20m sprint was one to watch at the state combine, while he uses the ball well with good decision making going forward – something which is key to helping smaller players prove their worth. A member of Claremont’s premiership-winning Colts side, Anderson made a solid return to the lineup in Round 14 after missing 10 games and did not look out of place. Still has improvements to make around his size, strength and ability to find the ball more consistently, but is a promising player.