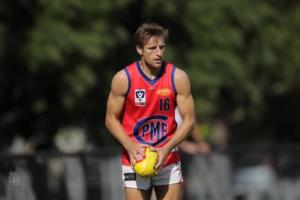 THE former Oakleigh Chargers midfielder/defender put together a consistent season at VFL level for Port Melbourne, having added more size to his frame and strings to his bow. His aerial ability and speed caught the eye throughout the year, while he is still building other areas of his game such as his fitness and improving his kicking. A good size at 187cm to play through the midfield, or perhaps half-back given his strengths and that role will buy him time to improve his endurance further. Unable to test at the Rookie Me Draft Combine, Searle will be hoping his consistent performances throughout the VFL season were enough to earn him a spot on an AFL list.

DRAFT CENTRAL’S INTERVIEW WITH CALLUM SEARLE AT THE 2019 ROOKIE ME DRAFT COMBINE: