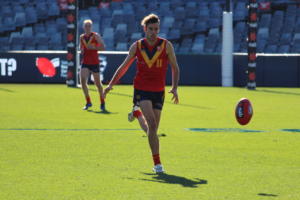 DRAFT ANALYSIS: "A player with some nice outside traits and superb marking ability, Park is looking to build up his strength and endurance to compete against bigger bodies."

ONE of the lesser-known South Australians who still produced plenty of highlights throughout the year was Callum Park, a lightly-built forward who has a number of impressive outside traits that make him a damaging proposition inside 50. Possessing a sub-three second 20m sprint, clean hands and class around the ground, Park is a player who can play in both deep and high forward roles within a team. He does need to add more muscle to his frame, weighing in at just 69kg despite being 189cm, as well as build his endurance base to become a more well-rounded player. With still much development left in him, Park is more of that later option in the draft, but could provide good value for a club given his upside and current skills.

Park averaged just over 22 disposals per game at SANFL Under 18s level for Glenelg, kicking at a solid 62.4 per cent efficiency. That number could improve given just one third of his possessions were won at the coalface, but also does not adequately show the impact he can have on a game given his little touches of class around the forward half. He averaged a whopping 7.2 marks per game, which is elite numbers by anyone’s standards, and his height helped him often win battles in the air, and his speed gained him the separation he needed to avoid one-on-one contests against stronger bodies. With just 1.4 tackles per game in the Under 18s, Park would be more willing to go in defensively once he has the body size to do so, though would be an area of improvement along with his contested work. In terms of his speed, he clocked a 2.974-second 20m sprint at the National Draft Combine, showing how dangerous he can be with space in front of him. With clean hands and the knowledge of where and when to find space, Park could achieve that separation and present himself and his teammates with goal scoring opportunities.

At Under 18s level, Park booted 11 goals from nine games, but just the one goal from seven games at Reserves level, still finding plenty of the ball (17.9 disposals per game), but had double the rebounds as he found himself further up the ground, often playing in the defensive half. This versatility is a strength of Park’s who, while his attributes speak to being a leading forward, given his aerial abilities and speed, do not be surprised if clubs view him as a rebounding defender. To develop as a midfielder, Park will need to improve his endurance, where he recorded just 20.4 on the yo-yo test at the National Draft Combine, below the average for similar players. This is an area that with a full pre-season can improve, and certainly spending time in the gym will help with his strength and thus, contested work. At the Under-18 Championships, Park averaged the 12 touches and four marks, booting one goal from three games. He still showed some promising signs going forward, but also showed there is still improvement to come. Overall, Park has some good upside and will be value for a side picking later in the draft.