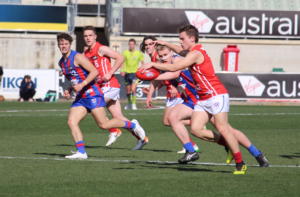 DRAFT ANALYSIS: "One of the most well-rounded draft prospects, Serong ticks plenty of boxes across multiple roles and is as consistent as they come with a high level of competitiveness."

TOUTED as one of the top prospected behind the obvious Oakleigh Chargers’ duo, Caleb Serong is one of the more well-rounded players in the AFL Draft crop, with very few glaring areas of improvement. The biggest upside for the 178cm midfielder/forward is the areas he could improve on are more easily doable compared to other players. Among his list of strengths in his game is his clean hands, footy IQ, clearance ability and strength, while his consistency and competitiveness is up there with Matt Rowell despite heading into the AFL Draft somewhat underrated – if that is possible from a potential top three pick. The areas that Serong can improve are his kicking under pressure – which has developed over the course of the season – his on-field emotion – which while good at times can also be a hindrance – and his size – which while his height will not change too much, he can still improve his muscle tone. Overall though, Serong is one of the more complete packages in the AFL Draft this year.

Serong is a natural leader, having co-captained Vic Country this year and played all four games, including a massive effort against South Australia despite feeling under the weather pre-game. He stepped up enough this year to win Country’s Most Valuable Player (MVP) and Best and Fairest awards, while splitting his time between Geelong Grammar and Gippsland Power throughout the year. While he might be undersized to play inside midfield at AFL level, he has a crack and certainly plays taller than his 178cm might suggest. He is so strong through the core and hard to shake, with his ability to win first possession and get clean hands out to teammates a standout feature of his midfield game. When forward, Serong is good overhead, and thrives in one-on-one situations, and if there was a relative strength measure, Serong might be at the top of the list. He outmarked Nick Bryan in the qualifying final on the wing – despite being some 24cm smaller. His consistency throughout matches is almost unrivalled and his competitive nature makes him well loved within the club and supporter base at the Power. This will no doubt give him similar plaudits at AFL level for the club that picks him up.

But the competitive nature can also get the best of him. It is an area where on some occasions he has crossed the line a bit too far – not maliciously, but through frustration – giving away a free kick or a 50m penalty for not putting up with opposition chatter. This area of improvement is one that can be fixed because it is about tempering him to play the way he naturally does, but to also develop restraint when opposition players get under his skin. Secondly, the other area that can improve – and has done so over the course of the season is his kicking under pressure. When in time and space, Serong is a terrific kick and able to hit-up targets well with great vision and high footy IQ. But it is the inside area where he can be rushed and try and do too much with the ball, which is when he can overcook the kicks or miss targets – which his 45 per cent kicking efficiency shows. While that statistic does not do justice to Serong’s technical skill, it does show an area of improvement. If one looks at Serong as a whole package, he ticks most boxes, and no doubt had he been 10cm taller, he would have been one of those prototype midfielders with more strings to his bow, but even at his size, Serong is able to influence contests like very few can, both in the midfield and down forward. Whichever club selects him is getting a potential future captain, as well as an on-field leader who will bleed for the jumper and do whatever it takes to help his side, and improve his game.