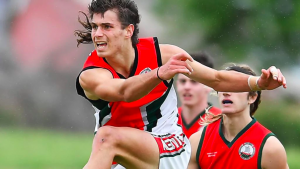 DRAFT ANALYSIS: “Poulter is a prototypical tall midfielder with a good inside/outside mix, who is also capable of impacting up forward.” – Eli Duxson

Woodville-West Torrens and Henley High prospect, Caleb Poulter is most often utilised as midfielder who provides grunt on the inside, but also threatens to open games up with his skills on the outer. At 192cm and 79kg, he has shown he can be a formidable target either around the ground or in the forward line, which serves as another showing of his versatility. He also spent some time on the wing, further displaying his neat blend of inside and outside attributes. After steadily increasing his draft stocks since representing South Australia at Under 16 level in 2019, he burst into the 2020 season with an impressive 34 disposals, one goal, 10 tackles, seven clearances, seven marks, and six inside 50s in Round 1 of the SANFL Under 18s. Since then, he not only received opposition attention, but also caught the eye of recruiters en route to bolting into first round contention. His outstanding performance in the South Australian Under 18 All-Stars fixture only consolidated such status.

Scoreboard accuracy, and consistently executing by foot are areas that Poulter could work on to ensure his presence up forward translates into greater scoreboard pressure. He managed to score in every Under 18 game bar one, but only managed 10.13, with five games of no goals and at least one behind a key factor. He is a lovely kick, but he tends to blaze away when within range of the goals. So, while he does the hard work in manufacturing an opportunity, conversion is still something that could increase his already big impact on games. His four-quarter consistency is not a glaring issue, but when he rotates between midfield and forward he can sometimes drift in and out of the game. In saying that, when he is on, he can turn a game on its head so if he can keep that level for longer periods, it is dangerous for an opposition team.

Poulter’s ability to damage on the inside and outside is indicative of his strengths. His tackling and clearance work allows him to get first hands on the ball, distribute it, or even go himself. His penetrating left boot is also a handy feature of his game as he has found himself linking his side between the arcs and sending them forward on many occasions. When forward, he is an awkward matchup as he is too tall for a small or medium defender, but not quite the focal point of an attack either. He is very strong overhead, credit to a sizeable vertical leap, and finds space quite easily on the lead, but is just damaging when the ball hits the ground.

Part of Poulter’s terrific ability to accumulate is the various ways in which he can find the ball. He covers plenty of ground when utilised through the middle, able to float up and back to mark uncontested, or provide a target with his aerial prowess. Alternatively, he is incredibly clean with at ground level and so efficient in heavy traffic, able to win the ground balls and quickly release by hand to teammates in space. As an overall package, Poulter has an arsenal of weapons difficult to match and could be the next tall midfielder to take the game by storm once he hits the elite level.

Poulter’s rise has culminated in his standing as a first round candidate, especially after showing his class against the best his state has to offer in the All-Stars game. He has all the tools to become an ideal modern day midfielder; tall, athletic, balanced, high-impact, high-marking, and more. On top of that, he is the kind of player who will inevitably attract fans, with his style easy on the eye, flashy boots difficult to miss, and flowing mullet already a talking point. Should he slide into the second round given he remains somewhat of a prospective pick, he could well prove a steal at anywhere between picks 20-30.