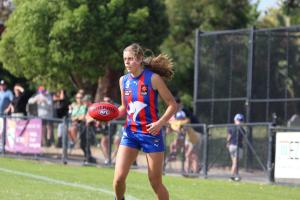 Brooke Vickers has demonstrated consistent ball use and composure, adding a touch of class with her ability to play in multiple positions.

Playing in the premiership winning Oakleigh Chargers for her NAB League campaign, Brooke Vickers was at times overshadowed by some of her teammates, but was just as important in aiding their way to the ultimate prize, with her outside class and disposal skill damaging moving forward as she moved up to the wing by the end of the season.

She made that ability to find space and spread from opposition her bread and butter, moving well to get handball receives or intercept a ball higher up the ground and provide run and carry from there.

When Vickers was playing for Vic Metro in the U19s AFLW Championships, she was able to fill a role on the half-back line and up on the wing where she brought those same strengths at the representative level, coming out of the two games averaging 13.5 disposals and 4.0 tackles, with a far more defensive focus than she often took for Oakleigh, still finding a similar amount of ball despite that focus to show she’s prolific either way.

After the championships and NAB League campaigns, Vickers went on to play three games for Port Melbourne in the VFLW, including a final, averaging 12 disposals in a similar role she played all season long.

In the future, Vickers may look to improve her overall strength to give her more of an advantage in marking contests and when competing for the ball at ground level, where she can often be knocked off the ball or out of the contest by bigger opponents. Having the backing strength may give her more confidence in these situations and complement her fundamentally sound technique.

“Vickers provided some good moments on her Port Melbourne debut, and whilst she showed more impact in some quarters than others, she was able to compete against senior bodies. Vickers showed promising signs with multiple marks and moments of possession of the ball demonstrated during her match against North Melbourne.” – Ashleigh Matosevic via “2021 VFLW Player Focus: Brooke Vickers”

“A medium defender who runs off half-back, hits up targets and then roams along a wing, Vickers is a player with some great upside, and is another Oakleigh Chargers premiership player. She averaged the 13.5 disposals, 3.3 tackles and a well-balanced two inside 50s and rebound 50s per game, such was her ability to cover the ground. The Chargers did not see as much of it in their defence as other teams, so Vickers had to hold a high line at times and be that kick behind the ball ready to intercept. She is not a renowned marker, but she is one to receive the handball and go, and uses the ball well in transition. Still developing areas of her game, as an overall prospect Vickers has some great talent.” – Peter Williams via “2021 AFLW Draft Positional Analysis: Tall/Medium Defenders”

“Playing in the premiership team, Vickers did a really impressive job of still catching the eye amongst a host of other talented players. Whilst she was often stationed at half-back and then pushed up to a wing at times, Vickers was able to use the ball well coming off half-back and remain balanced and composed with ball-in-hand to deliver the ball inside 50. After averaging the eight disposals in her bottom-age year from the two available games – also big wins – Vickers stepped up to average the 13.5 disposals, and around two inside 50s and rebound 50s, as well as 3.3 tackles. She was a consistent feature for the Chargers, and while some others might have racked up bigger numbers, Vickers was a reliable player to produce transitional running.” – Peter Williams via “Ones to Watch: AFLW Draft eligible surprise packets”