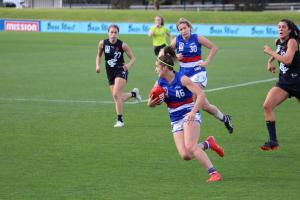 Brooke Hards has become a damaging utility who initially excelled as an inside midfielder, but has since played in every role at VFLW level, showcasing her burst and footy smarts for the Western Bulldogs.

After representing Vic Country at both Under 16s and Under 18s level – the latter as a bottom-ager – Hards was named co-captain of the Pioneers in her top-age year. Unfortunately missing out on being drafted in her top-age year, Hards opted to play for the Western Bulldogs as a train-on player in the VFLW instead of heading back to the NAB League Girls.

There, Hards started as a defensive forward to improve her versatility, then was thrown into defence, a role she played at Under 16s level for the Pioneers. Having already mastered the inside craft at junior level, Hards was also utilised as a wing, settling in behind the ball to use her athletic traits to advantage and provide plenty of run for the Bulldogs.

Whilst her 7.5-disposal average might not standout on paper, her impact-per-possession is really high, often taking plenty of grass with every touch, backing herself to burst past the opposition. When in the midfield, she can work her way out of a stoppage, and when in space, is not afraid to take a couple of bounces and hit a target under pressure.

Working on her composure and confidence to back herself, Hards has the traits – such as footy smarts and athleticism – that are the hardest to develop, so the teenager has plenty of room for upside.

Having only just turned 19 by the time the 2021 AFLW Draft rolls around, Hards has already ticked plenty of boxes through her junior and senior career, and should be considered as a prospect who can only get better with more experience given her coachability and natural leadership tendencies.

“The former Bendigo Pioneers co-captain rounds out the top 20 in our Power Rankings and the second VFLW player to feature. The soon-to-be 19-year-old excelled as an inside midfielder at junior level, but chose to step up to VFLW level where she improved on the areas that saw her overlooked. Hards moved to the outside playing every role under the sun from forward, to back and wing, able to win the ball and most importantly build up metres gained with her run and carry. Boasting enormous upside and great footy smarts, when able to get-and-go, Hards is damaging with ball-in-hand and has well-balanced athleticism, mainly her acceleration. While her numbers might be lower than at junior level, her game-impacting moments have been higher making her a valuable prospect.” – Peter Williams via “Draft Central AFLW Draft Power Rankings – Victorian Pool: June 2021”

“It was remarkable what she did last year, she left at 4:00 on Saturday morning to come to our trial games in Bendigo to watch the girls play – she didn’t play. “So that’s the commitment there, it’s a return trip in the day equivalent to a drive from Melbourne to Sydney. “She’s (Hards) clearly our role model/leader.” – Steve Sharp, former Bendigo Pioneers Talent Manager via “Belief growing at the Pioneers”

“We’ve got a girl by the name of Brooke Hards, she’s a 17-year-old in February, she’s a midfielder – a real hard-running player, she’d be the best performed athlete in our program we think. “She’d be under eight minutes or low sevens in regards to her 2km stuff so she’d show up some of the boys, so we’re looking for some exciting things from her.” – Sharp via “U18 Girls season preview: Bendigo Pioneers”

“Hards showed a willingness to back herself at all times coming off half-back. She got caught a couple of times, but for the run and ability to crash through opponents, it was worth it. She charged out of defence a number of times and was often under pressure. She laid a great tackle at half-back early in the game and hit-up Maggie Caris on the wing.” – Peter Williams via “Scouting notes: National AFLW U16s Championships”

Tackling Georgia Patrikios and running off half-back vs. Southern Saints, VFL Women’s – May 23, 2021: