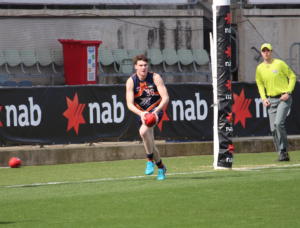 A tall defender who represented Vic Metro this season, Newman is a reliable player who captained the Cannons in season 2019. A leader by on-field actions, Newman is a marking machine who was capable of taking double-figure marks in games, and is a smart reader of the play. He also managed to accumulate a high of 36 disposals in the NAB League, giving him the quality of being able to man a taller player but then also provide an attacking threat from defence. His booming kick is often a go-to and allows Newman to gain serious meterage given he is not afraid to burst through opponents in the road before disposing of the ball. Newman’s big frame is something that makes him readymade, with just some polish, more sound decision making with ball in hand on-field areas to work on as he develops. He also has athletic areas to improve in the future, but is a versatile type who can play on talls or smalls and go both ways.