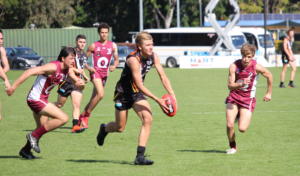 DRAFT ANALYSIS: “Lake is an athletic midfielder who can hit the scoreboard and adapt to roles on each line with exciting passages of play” – Michael Alvaro

One of the brightest Northern Territory (NT) draft prospects this year is Brodie Lake, a wonderful athlete who glides in motion and boasts great versatility. Though he hails from the Top End and has played at senior level with Southern Districts, Lake’s footballing journey has taken him right around the nation. As a bottom-ager he represented Peel Thunder in Western Australia, before a pandemic-inspired move to South Australia saw him suit up for Central District. Most significantly, he trained with Gold Coast during the off-season and is tied to the Suns through their access to the Darwin zone. The 18-year-old has twice represented the NT’s Under 16 side, taking out its MVP award in 2019 and going on to earn selection in the Under 17 Futures All-Star fixture. Having received a National Combine invite, Lake also ran out in this year’s NT and South Australian Under 18 All-Star games, capping off an outstanding season.

In his time with Southern Districts and the NT Thunder Academy, Lake mostly cut his teeth as a running defender or outside midfielder, but has since transitioned to more of a midfielder-forward role. Though he is still looking to work on his repeat running and increase the amount of contests he attends, Lake has a real impact while running through the engine room. He essentially took over the mantle of Central District’s prime ball winner as soon as he entered its Under 18 side, with his aggression and elite athleticism aiding that cause. Lake is a nice size at 185cm and is quite strong at the contest, but adds class to his grunt with terrific agility and smooth acceleration to burst free from the contest.

While his endurance is touched on in the improvements section, Lake is the kind of player who seems to glide across the ground and pop up in all areas. His stylish motion sees him cover plenty of ground quickly, albeit in spurts, with eye-catching dashes a typical trait of Lake. Those kinds of plays tie into his versatility; confirming that Lake is not only versatile in the sense that he can impact on each line, but also through his balance of inside and outside attribute. His tackling pressure and hunting style at stoppages stood out this year, and is something which bodes well for making an impact at either end of the ground. Up forward, he can put pressure on opposition defenders, while shutting down attacks while posted in defence.

Another of Lake’s weapons is his knack for clunking strong overhead marks. A sizeable vertical leap combines with clean hands to help pull off such feats, and has proven a particularly effective wildcard while resting forward. Speaking of, Lake is a player who has also developed a handy ability to hit the scoreboard this season. In the South Australian All-Star fixture, Lake was his side’s only goalkicker for the better part of three quarters, and showcased his finishing ability with a phenomenal checkside goal from about 35 metres out. While he is quite efficient inside 50, Lake’s kicking on the move can do with refining at times as he tends to send forward some wobblers in full flight. He is still capable of being quite clean via hand and foot, so it is perhaps more a case of consistency.

Given his range of weapons and the character shown to actively seek footballing opportunities away from home, the late-rookie tag seems a touch unkind. However, this year’s draft looms as a rather short one considering the seemingly inevitable cuts to list sizes, so Lake could well end up in the 40-50 range. He is, of course, eligible to be pre-listed by the Gold Coast Suns, but may well have attracted interest from other clubs with his athletic package, senior experience, and form in big games. The ‘go home’ factor should prove a non-issue for the Territorian, another tick for clubs who may look to snap his services in the third or fourth rounds.