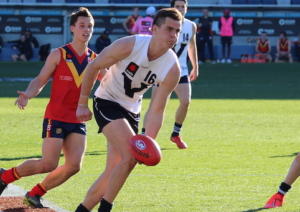 CLUBS looking for a player who can do just about anything need look no further than Brodie Kemp. The Bendigo Pioneers utility has long been touted as a player to watch come his draft year and he delivered in spades throughout 2019, particularly during the National Championships. The Geelong Grammarian spent most of his year plying his trade in school football, but unfortunately had his season cut short by an ACL tear in the same competition just before he was scheduled for a NAB League return. Still, his three-year elite pathway resume is as good as any draft prospect in this year’s crop and Kemp’s upside will make him even more desirable heading into November. His presence helped Bendigo to their first two wins of the year in the opening rounds, and his season-best 27-disposal game against South Australia was crowned by kicking the winning goal – a feat he very nearly repeated in the very next round. We knew he could make a difference, but Kemp’s true game-turning abilities really came to the fore this year and propelled him into top 10 draft contention post-championships. Injury means recency bias will work against him, as will a lack of recent combine results, but Kemp’s work throughout the year alone makes him a player worthy of such honours. Expect clubs higher up the ladder with the time to be able to wait on or develop high-end picks to roll the dice on the well-built mover if the draft order shuffles.

The word on Kemp coming into the season was that he was destined for more midfield minutes after finding a home as a high-marking intercept defender in 2018, but he would end up having an impact just about everywhere. He adapted his kick-dominant game to become a handball-happy midfield extractor, was solid in his usual defensive post for Vic Country, and eventually a game winner for them up forward. Kemp’s success up forward lends to his key strengths of impact and overhead marking. He showed his worth with a huge contested mark in the dying seconds against South Australia to snare the winning goal, while doing the same twice in the last quarter against Western Australia to almost drag his side over the line. All were really game defining moments, and while Kemp does not win crazy amounts of the ball, he has important touches. Add to that a sub-three second 20m sprint and phenomenal agility and you have a prospect that can pull off just about anything. A good size to boot, Kemp would be a top 10 lock if not for his recent injury.

As close as Kemp is to being a complete player and as much as he can do it all on a football field, there remains room for improvement at this stage. Kemp’s disposal average of an even 20 across the NAB League and national carnival is quite impressive given the deep position he often took up either end of the ground, but if he is to play more permanently in the midfield, he can work on having bucket-loads of possessions more often. Perhaps the more pressing question is his kicking on the move, with Kemp’s delivery wavering at times. It seems a matter of consistency as his delivery out of the back half usually assured, but not quite perfect as it stands. When he has time and space he can deliver, but it is ironing out that kick at speed to take the next step. Another area Kemp was keen to improve on at the start of the season was his endurance after an okay 21.4 yo-yo test at the NAB League Fitness Testing Day, which he had made inroads towards improving. But after his knee injury he will need to build that back up and get match fitness in for him to have a real impact in his second season of AFL football. Overall a really talented prospect who has massive upside once he recovers and gets some runs into the legs.