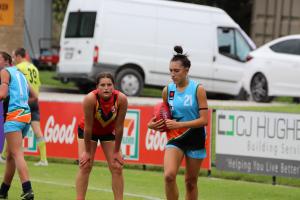 Brodee Mowbray is a fierce competitor playing for the Southern Power, and a member of the GWS GIANTS Academy. Mowbray stands at 168cm and is an unbelievable tackler, averaging nine per game across two matches for the Allies, and 10 in her match for the GIANTS at NAB League Girls level.

Coming from a netball and Oztag background Mowbray loved the aggressive nature of football, able to bring down players in tackles to lock up the ball or win it back for her side. That aspect of her desire showed in her output this year, playing three games between the GIANTS Academy in the NAB League and Allies in the national championships, and laying a whopping 28 tackles in that time.

Aside from her tackling, Mowbray has superb work rate and spread to get to the outside and win a lot of ball to put inside 50 in transition, and is a kick-first player. As a top-age talent, Mowbray has an extra year of development in her, and while her aerial prowess could still improve, her ground level work is what makes her the player she is, and earned her an AFLW Draft Combine invite.