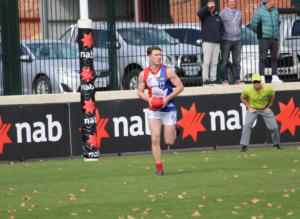 DRAFT ANALYSIS: "A reliable defender who loves a niggle and is hard to beat one-on-one due to his positioning and strength overhead."

EVERY team needs a reliable defender and leader who will not leave anything out on the park and bleed for the jumper. No player exemplifies that more than Gippsland Power’s Brock Smith. The Power defender has all the traits of playing a lockdown third tall role who can also nullify smaller players, while providing some offensive run out of the back half. In his bottom-age year, Smith was predominantly a lock-down defender who consistently made life difficult for his opposing forward. In 2019, he started in a similar role, but was unleashed mid-season where he picked up more than 20 touches in seven consecutive games between Rounds 5-17 either side of the National Under-18 Championships. While Smith is not the most athletic player in terms of his speed or agility, he makes up for that in his footy smarts one-on-one and his ability to play any role thrown at him.

Following a solid but still lower possession start to 2019, Smith’s strengths really came to the fore from Round 5 onwards, where he picked up 24 touches against the GIANTS Academy and never looked back. In back-to-back games against Eastern Ranges and Calder Cannons in Rounds 7-8, Smith combined for 51 disposals and 15 marks, a feat he somehow beat during and post-champs against Oakleigh Chargers and Tasmania Devils in Rounds 11 and 14, picking up 52 disposals and 21 marks. He also booted two last quarter goals against the Devils with the game in the bag. Despite lifting his offensive output, Smith remained accountable in defence, not losing his ability to beat his opponent one-on-one, but instead having the freedom to play further up the ground and put the squeeze on the opposition. He would often wrestle in a marking contest, win the ball and then take off down the field, or settle his team down with great leadership. His desire to never be beaten helps him in his defensive role, and he is not afraid to take on players much taller than him, or players with better speed.

Smith is an instigator when it comes to getting under the opposition’s skin and is one of those players teammates love to play with, and opposition players hate to match-up on. With his ability to regularly rebound and provide a penetrating kick – all his three goals came from long-range efforts – Smith not only talks, but backs it up through his performance. While Smith has plenty of strengths in his game, there are areas he can still improve on, such as his tackling pressure. For a niggling defender who loves one-on-one contests, Smith only averaged 1.8 tackles per game which is surprising, but the medium-tall defender gets it done in the air. Furthermore, a reason behind his low tackle number could be his athletic traits of speed and agility, with a 3.15-second 20m sprint and an 8.73-second agility test in the NAB League Fitness Testing Day pre-season testing – both below average. Unfortunately Smith fell ill late in the season and was also unable to test at the National Draft Combine. Along with his speed, Smith has the body to go into the midfield but is yet to spend considerable time in there given his performances down back, and the midfield development could be one he makes in the future once he reaches the elite level. While his athleticism might not be super, Smith’s footballing traits and desire to be the best possible player – and beat his opponent every time – make him a valuable commodity for AFL clubs ahead of the AFL Draft.