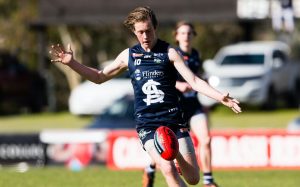 DRAFT ANALYSIS: “This year’s draft bolter, Cook is a forward/wingman with great attacking nous and the ability to win games off his own boot.” – Michael Alvaro

There seems to be one every year and in 2020, Brayden Cook is the player who has bolted from the clouds to enter first round draft contention. The 18-year-old has undergone a steep rate of improvement as a top-ager, lauded for his game-winning ability and contested marking, among other traits. Cook is able to generate terrific attacking drive from the wing, while also looming as a wildcard for South Adelaide when games are up for grabs, as he can move forward and win them off his own boot. At 187cm, he is the prototypical modern day footballer with terrific athleticism and versatility. His form this year not only saw him earn a Reserves berth, but also yielded a National Combine invite. Although Cook was unavailable for the South Australian (SA) All-Stars showcase, he remains a first round chance with plenty of upside.

While many of Cook’s strengths lend to one another, each one individually serves as a massive tick for a player of his role. First is his versatility, which refers to more than just being able to play either on a wing, half-forward flank, or even at full forward. It also ties into his style of play, as Cook is able to collect plenty of ball between the arcs and play provider, while also doubling as a target either at the beginning or end of transitions. Essentially, he could be the player teammates look for directly out of a kick-in or stoppage, but also works as the final link in the chain deep inside attacking 50.

Cook’s forward craft also makes up much of his appeal, especially when discussing his match-winning capacity. While he has the smarts and goal sense to play the position naturally, the option to move Cook inside 50 can somewhat be looked at as a ‘break glass in case of emergency’ scenario. He can have a major impact on games, highlighted by his Round 8 performance against Woodville-West Torrens. In a one-point win, Cook was South Adelaide’s leading goalkicker (5.5) and disposal getter (22), dragging his side over the line after trailing at important stages.

Inside attacking 50, he showcases a terrific variety in terms of goal conversions. When positioned deep, he is a threat one-on-one and utilises his marking prowess to establish set shot opportunities. But his work in open play is even more eye-catching, showing great smarts in his positioning and anticipation to rove packs before finishing with checksides, snaps, drop punts, and dribbles. His season tally of 26 goals (two per game) is quite impressive, and includes eight hauls of multiple goals. Cook went goalless just thrice, and his only scoreless game unfortunately came in a semi final loss. While the youngster’s scoreboard impact is profound, his finishing consistency is an area of improvement having kicked more behinds (27) than goals in 2020. Further to the point, there were two outings where he booted five behinds.

Part of Cook’s allure also comes through his overall athleticism. He boasts a handy vertical leap (over 70cm on both feet, running) and decent agility, both of which help him thrive in different aspects. One of Cook’s major strengths is his overhead marking, with nearly a quarter of his average 7.1 marks coming in a contest. His agility aids a sound evasive game, as Cook has the awareness to bide time as would-be tacklers close, before escaping and either letting a long ball loose, or directing a shot on goal.

Some of his best plays, helped by both the aforementioned athletic attributes, are seen as Cook breaks forward on the outer. His high attacking production comes from terrific decision making and vision with ball in hand, which is why he is also so effective up on the wing. Cook is able to break into dangerous areas, receive or mark, and then create scoring opportunities with his raking kick.

As an attacking package, there is not much more you could look for than what Cook possesses. However, building strength to improve his contested game at ground level, as well as the explosiveness to break away from congestion would add a couple of handy strings to his bow. He is not the quickest player, so adding that toe on the lead could also help his forward craft when stationed deep. His tackle average sits at 1.9 and he managed just two clearances this year, pointing towards a very outside kind of game. It suits him, but there is always room to improve.

There are so many traits that Cook possesses which clubs seem to faun over, and it is no real surprise that his recent form has him poised around the top 25 mark in this year’s cohort. Although medium forwards sometimes slide, Cook is one with points of difference and perhaps most significantly, game-changers like him are so difficult to come by. That will likely see his value be placed around the late first round, though he may also fit in among the early second round bottleneck. With even more development in an elite environment, Cook could really be moulded into anything at the next level, making him the ideal prospective pick.