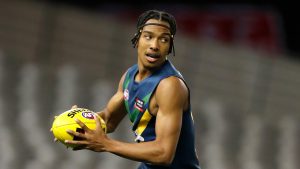 DRAFT ANALYSIS: “Walker is an athletic medium defender who takes the game on and makes good decisions while running off half-back.” – Michael Alvaro

Another draft prospect off the East Fremantle football production line is Brandon Walker, a rebounding defender with eye-catching athleticism. Along with twin brother, Chris, Walker is tied to Fremantle having developed through its prolific Next Generation Academy (NGA). The smooth mover strung together a rich run of form towards the end of this year’s WAFL Colts competition, before suffering a suspected broken foot in the Sharks’ preliminary final loss to Subiaco. He has long been part of the West Australian and AFL Academy pathways; earning selection in his state’s Under 16 and 18’s squads, while also representing the Under 17 All Australian team. Unfortunately, Walker’s foot injury prevented him from testing at the recent National Combine, and playing in the West Australian Under 18 All-Star fixtures. Nonetheless, he remains a prospect who will have plenty of Dockers fans excited come draft time.

Walker is a player who proves easy on the eye, with his smooth movement and highlight-reel athleticism capturing the attention of onlookers. Most often stationed at half-back, Walker fulfils his defensive duties by either intercepting overhead, or mopping up with clean hands and an explosive turn of speed at ground level. His mix of power and agility also comes into play when exiting the defensive area; often seen spinning, side-stepping through traffic, or fending off opponents in close quarters. From there, his speed again comes to the fore as he breaks the lines in transition.

Capping off Walker’s rebounding art form is his sound decision making via foot. Whether he is in the clear or forced to improvise under pressure, the stylish top-ager is able to hit targets forward of the ball more often than not. Walker can air his kicks at times, which may see him falter a touch at AFL level, though it should prove an easy fix for such a classy player. His disposal efficiency numbers would also rate highly among his peers.

These traits combine to make Walker an effective and dependable rebounder, but also one who can really hurt the opposition. His willingness to move on quickly, burn opponents, and break from traffic in potentially dangerous areas makes him a weapon in the back half. Add repeat running and chained possessions to that gamestyle, and you have a prospect who so easily turns defence into attack.

One of the knocks on Walker, for all his natural talent, has been his consistency and ability to accumulate. He was touted as more of an high impact-per-possession player coming into 2020, though has somewhat broken that mould as a top-ager while remaining impactful. His average of 18.5 disposals and 4.9 marks across a full WAFL Colts season read as respectable numbers; with season-best tallies of 23 and nine coming against West Perth in Round 6, while his lows of 14 and two came in Round 1. Given his weaponous points of difference, he is a much different prospect than your dime-a-dozen accumulating half-back.

In our eyes, Walker’s true value sees him sit just outside the top 25 prospects of this year’s cohort. It would take a bold club to place a bid on him early in the second round, but he seems to have suitors within that pick 25-35 bracket. The bidding process could work in one of two ways; either enticing a keen club to keep the Dockers accountable with an early bid, or staving them off until the 35-40 mark. The latter would obviously prove much more ideal for Freo, given a bid for Joel Western could also come within a similar range. Fremantle currently holds picks 10 and 28 having gone into points deficit last year.