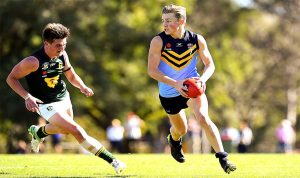 DRAFT ANALYSIS: “Campbell is an exciting midfielder/forward who is aligned to the Sydney Swans Academy and could earn a bid inside the top 10″ – Peter Williams

Braeden Campbell is the most highly talked up Northern Academy member this year and has produced some impressive performances over the past two seasons. Without a doubt, Campbell’s kicking is his greatest strength, but his game is complemented by his speed and vision which allows him to play inside or outside, and even forward where is proves able to hit the scoreboard. At times he can be a little fumbly in contested situations, which is an area he can work on, whilst also lifting his overall numbers which will come with more midfield minutes.

Campbell is one of those players you can quite clearly see has AFL attributes. He has the ability to win the ball in congestion, then spread to the outside and use the ball well by foot with some elite passes inside 50, making for such a damaging appeal. It is easy to see why he is so highly touted and could cost Sydney a pick in the top 10, and certainly in the first round. A 2.95-second 20m sprint time shows just how quick he can be, and while some players do not always express their speed on the field, Campbell certainly does.

In 2019 he often played forward with stints in the midfield, and then in the All-Stars game this year, it was more the opposite where he started on-ball and then went deep forward to be a leading target. It is the former where he is expected to start at AFL level, with his speed on the lead a challenge for any defender. He also knows how to create scoring opportunities in multiple ways, whether it be from a stoppage situation, lead and mark, or a quick kick out of nothing, Campbell knows where the goals are and regularly finds them.

Having played predominantly forward in the past, Campbell’s 12.0 and 15.7 average disposals at the AFL Under 18 Championships and NAB League level are hardly cause for concern, particularly from a bottom-ager. It would have been better for him to really prove himself in 2020 through that full-time midfielder role against the best in the country, but he hardly put a foot wrong in the two Northern Academy games against the GIANTS and in the AFL Sydney. In other minor adjustments, Campbell could build his tank a little further from an already solid base. It is certainly an area that could improve, and this will help him be more damaging for longer.

When assessing Campbell’s point of difference in the top group of players, one has to consider his disposal and vision as the best of those at the top-end – or perhaps any end – and given he also has the athletic traits to accompany his natural footballing ability, he will be an excitement machine in 2021 and beyond.

Very few would expect Sydney not to match a bid wherever it comes in as they hold pick three which will be safe from a bid, whilst their pick 22 in whatever form it may end up on draft night – be it higher up or a multitude of different picks – will need to be used to match Campbell and teammate Errol Gulden. Teams could make the Swans pay fair market value later on in the top 10, or just outside it, but either way he is worth that because of his traits and upside for the future.