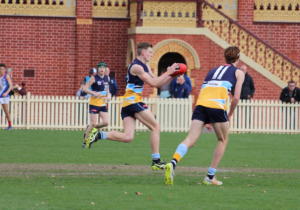 DRAFT ANALYSIS: "A raw prospect who has great footy smarts, acceleration and a high vertical leap that needs to build a greater defensive game with a focus on contested work."

BRADY Rowles is an intriguing prospect in this year’s AFL Draft. He has some serious upside and exciting traits that are very transferable to AFL level, but he also has some clear deficiencies in his game that need to be developed in order for him to take the next step. Athletically, Rowles is fairly impressive with his speed off the mark a highlight of his game. He takes the game on, challenges the opposition team to stop him and can really break a game open with his dash and dare. He has played both at half-back and on a wing, with his outside ball use good, though his disposal under pressure still needs work. He needs to add a greater contested side to his game and a bigger tackling presence, with his endurance an area of improvement that can see him find more of the ball and have a greater impact on the game for longer. At his best, Rowles is a damaging prospect who is eye-catching, but it is closing the gap between when he is ‘on’ and when he is not having an influence on the game.

In the 2019 NAB League Boys season, Rowles averaged 12.8 disposals and 2.4 marks, with almost identical inside 50s and rebounds showing his ability to transition between half-back and half-forward. They are not big numbers, which is an improvement Rowles will have to make but it will come with an increased endurance base. At the National Draft Combine, Rowles impressed in the 20-metre sprint with a sub-three second effort as well as a really solid agility test. His running vertical leap of 98cm was a ridiculous 22cm more than in the pre-season, and showed that he is strong in the air. Often though, Rowles is more situated in space, waiting to receive the ball and go. Once the ball is in his hands, Rowles looks to play on wherever possible, breaking the lines and upsetting the opposition defensive zone. It is this dare and X-factor if you like, that leaves a lasting impression with you rather than some of his improvements. Rowles is the kind of player you focus on what he can do rather than what he does not do, because he has some special traits. At ground level, Rowles is clean and he also has the smarts to get to the right positions and make the best of a situation such as against Gippsland Power in Round 3 under pressure, he had a perfect connection with a long kick off the deck that sailed 35m and hit a target which obviously had an element of luck, but he had the smarts not to take possession otherwise he would be dispossessed.

Rowles’ offensive game is quite impressive and it is the defensive aspects that need sharpening up such as his tackling and contested work. At times he would win less than 20 per cent of his possessions in a contest with his run on the outside influential for his side. But with less time and space at the elite level, and the knowledge that 40 per cent contested is the area most identify as being able to handle the rigours of AFL football, Rowles will have to work on that side of his game. It does not mean he has to be a contested beast, but by developing more of a contested game, Rowles can spend more time in the midfield and use his smarts and speed to have a driving influence through the middle. At 186cm, Rowles is tall enough to handle a full-time midfield role, and by adding more strength to his 72kg frame at the start of the season, he will be able to compete more effectively around the stoppages. He also averaged just the 1.6 tackles this season, and as a player who is used for his outside run and carry, this is not overly surprising, but with the speed he possesses, Rowles should lift those numbers to apply more defensive pressure to the opposition. Overall, Rowles is a really raw prospect with some exciting traits that will entertain fans with his ability to take the game on. If he can utilise his traits in the best possible way and round out his game with the improvements he needs to make, he can become a really influential player. Being the raw type he is, Rowles is more of a late-to-rookie prospect, but the development stage if and when he reaches the top level, will be the key to how far he can go because the sky might be the limit.