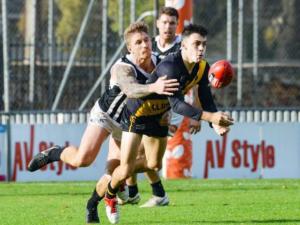 AT 68kg, not many would expect Glenelg’s Brad Close to rip the ball from opponents’ arms, but his competitive nature helps him win one-on-one contests. His acceleration (2.970-seconds on 20m sprint) and agility (8.110 seconds on agility test) help him to be a more dangerous outside player, who could still accumulate more of the footy and add more size to his frame, but he has no fears attacking the contest. In saying this, Close could definitely lift his accumulation, averaging the 16.6 disposals with a kicking efficiency of 51.6 per cent, a figure of which does not properly indicate his cleaner disposal. Of course he could still improve the area, but he is still rated above average compared to his peers. His versatility to play between midfield and forward also makes him a valuable addition to any side.