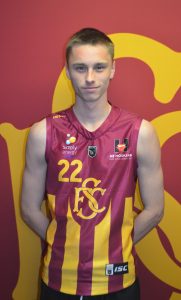 DRAFT ANALYSIS: “Morris is a raw, yet versatile defender who can play both tall and small, while also acting as a third-up intercept marker with his reading of the play.” – Michael Alvaro

Subiaco premiership colt Blake Morris has come on leaps and bounds over the last two seasons, with his rate of improvement propelling him onto the 2020 AFL Draft Radar. The high-flying defender burst onto the scene as Western Australia’s MVP during last year’s Under 16 National Championships, also earning All Australian honours for his outstanding carnival. His form was enough to warrant selection in the 2019 Under 17 All-Stars showcase, making him a promising addition into the subsequent AFL Academy intake. As a top-ager, Morris built into the season steadily after overcoming a preseason ankle issue, culminating in an outstanding finals series which was capped off by achieving premiership glory for the Lions. Morris also earned a National Combine invite and took part in the WA Under 18 All-Star fixtures, showing his wares for one final time before the draft. He looms as a late candidate with plenty of upside and development left, and is an eye-catching talent in full flight.

It was hardly a surprise to see Morris make his way into the AFL Academy fold after the highly promising form he showed in 2019, with many of his best traits taking full toll during the Under 16 national carnival. Morris was clearly his state’s best player across the competition, predominantly playing above his height as a key defender who excelled aerially. While he gave up a heap of size and strength against many opponents, Morris was able to cut the difference through sheer tenacity, sound reading of the play, and versatile work at all levels. The 18-year-old’s ability to intercept mark would have particularly piqued the interest of onlookers, as he soared high to take some unreal grabs above packs or going back with the flight of the ball.

He did not quite replicate such form in the Under 17 All-Stars fixture and was a slow starter during this year’s WAFL Colts season – albeit post-injury – perhaps conveying he is somewhat of a late bloomer in terms of development. Having been made to play roles exceeding his 187cm/70kg frame, Morris transitioned well into more of a third tall role for Subiaco of late. His lean figure is filling out slowly, but Morris is a rare type in that he can match up well on both tall and small opponents. His obvious aerial strength in intercept marking and closing well to spoil is matched by solid athleticism across the ground to mop up at the fall of the ball and clear his side of any danger.

Morris is generally a good user of the ball, though can come a touch unstuck and rush his disposal under mounting pressure. His short kicking game is decent enough to exit defence efficiently, and once Morris builds more muscle he will be able to afford himself more time to deliver forward with such accuracy. He is already quite springy in his step and jump, so building that power will allow him to further excel against senior bodies both in the air and at ground level, particularly considering his style of play. It makes him somewhat of a long-term prospect, but there is plenty to work with already. Morris’ last month of the Colts season was just about his peak thus far, averaging 16.5 disposals and 5.3 marks compared to 12.4 and 4.0 as a whole. If he can maintain that output as a third-up defender who impacts through intercepts, he will put himself in good stead to succeed at the next level.

As mentioned, Morris is firmly in the category of long-term options among this year’s draft pool. Clubs may value his best traits, such as overhead marking and versatility, and back themselves to harness those assets as he further develops his body over time. Given his steep rise of late, Morris could be one to really come on as an over-ager should he miss out this year as list sizes remain in the unknown, with plenty of upside to work with. He is in the late-rookie range as it stands and would be a handy pick which clubs can turn to down the line once he is ready to compete at senior level.