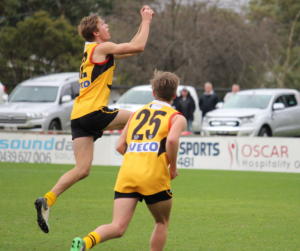 A former volleyballer, Kuipers rose up into draft calculations on the back of some handy form in the NAB League for Dandenong as a key position defender. The 197cm talent showed he has serious upside with a 2.94-second 20m sprint and a 73cm standing vertical leap. He became a strong interceptor, and while he is not a high accumulator and needs to build his game sense and skills, is a blank canvas for clubs. Having made the Vic Country squad off so little games, it showed that recruiters were intrigued by Kuipers, and he averaged the seven disposals per game across two matches for Country. There is still a long way to go for the talented tall, but like most key position players, Kuipers has the traits that could take him to the next level with the right development.