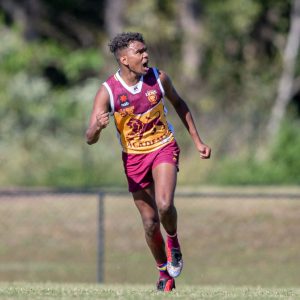 DRAFT ANALYSIS: “Coleman is a highly skilled forward with an elite combination of speed, strength, and agility that makes him very difficult for defenders to stop.” – Tom Cheesman

Coleman is one of the most exciting forwards available in this year’s crop. He has the explosiveness and x-factor that recruiters often look for in draft prospects, and he should only get better with experience in the AFL system. As one of many to be coming through the strong Brisbane Lions Academy cohort this year, Coleman already has ties to a club in the Sunshine State. Like his elder brother, Keidean, Queensland is a second home to Coleman having moved across from the Northern Territory, and he has donned the Maroon jersey from as early as Under 16 level. A well-known quantity in the AFL Academy pathway, the 18-year-old made the most of his top-age season with strong showings in the Academy Series and a great contribution to Morningside’s senior QAFL premiership.

The Brisbane Lions Academy prospect had a fantastic season for Morningside in the QAFL. He played predominantly as a deep forward, which is his strongest position. His aerial ability makes him a serious threat when the ball is in the air, but he also has electric speed which makes him dangerous once the ball hits the ground. Multiple defenders usually attempt to spoil when Coleman flies for high marks, which creates plenty of space at ground level for his teammates. Coleman has a great football IQ too, so he makes good decisions regarding whether to fly or stay down at any given contest.

With his fantastic strength and leaping ability, Coleman plays much taller than the 181cm he is listed at. His combination of strength, speed, and agility makes him difficult for defenders to stop, particularly in one-on-one contests. Defenders often panic in these situations and give away free kicks to Coleman for holds. He also positions himself well in one-on-ones and is great at reading the flight of the ball. His kicking is another strong attribute, as he rarely misses a target and delivered some outstanding spearing and well-weighted kicks in the forward half this season. He is very crafty in front of goal and reliable from set shots.

Throughout the year, he earned some midfield minutes as well and showed that he is a clever stoppage player. He is composed in congestion, lays strong crunching tackles and works hard to follow up his possessions. Coleman rarely fumbled under pressure at senior level, which demonstrated how confident he is against the bigger bodies. His proficiency as a forward meant that he only ran through the middle in short bursts, but this is a side of his game that should continue to develop as he builds a stronger aerobic base.

Coleman’s draft stocks have risen even further on the back of his senior QAFL Grand Final performance, where he was one of the best players on the ground. He applied relentless forward pressure, kicked two clever goals and set up numerous other scoring opportunities in a low-scoring contest.

It will be fascinating to see how Coleman’s situation plays out on draft night. Brisbane has rights to match any bid for him since he is a part of the Lions Academy, but the question is whether they will match an opposing bid if it comes early. The Lions have a reasonably stable set of small to mid-sized forwards with Charlie Cameron, Cam Rayner, Zac Bailey, Lincoln McCarthy and Coleman’s brother Keidean, so one could argue that Coleman does not fit the preliminary finalists’ immediate needs. The Lions must also factor in that bids are likely to come in for other academy prospect such as Carter Michael and Saxon Crozier, their other leading Academy prospects. Coleman seems the leading product at the moment, but the Lions’ Academy depth could see a repeat of last year’s bidding antics which saw Noah Cumberland and Will Martyn land at Richmond. Brisbane will consider themselves lucky if Coleman slides past the third round, though he should end up on their list regardless.