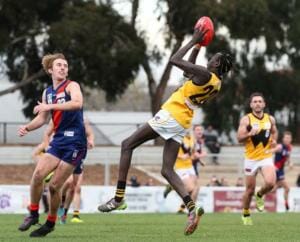 THE 189cm midfielder has spent time up forward and played between the roles at times in season 2019. Despite being that prototype size, Malual is still only 65kg and very raw so has a lot to improve but has great upside. Athletically, Malual was one of the stars of the State Combine, recording an 8.02-second agility test and 21.8 yo-yo test – the best at the combine. To compete at AFL level he will certainly need more time in the gym, but the way he moves and can run all day, they are traits that recruiters cannot help but take notice of. Now 23-years-old, Malual has a few extra years on him compared to others, but has made the rise up the leagues to compete strongly at VFL level.