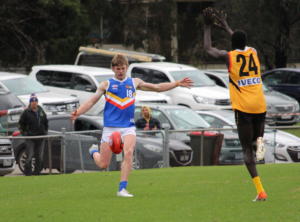 A 198cm ruck/forward who has also spent some time in defence, McCormack describes himself as a “fourth midfielder” given his work at ground level and ability to not be out of the contest after winning a hitout. He has a neat 3.02-second 20m sprint and 8.36-second agility test to accompany his 87cm running vertical leap. He has to provide a greater presence in contests, but has plenty to work with given his rare athletic base for someone of his size. McCormack’s competitiveness put him in great stead for earning a state combine invite, going with his impressive 11-game run of not falling below 10 disposals in the NAB League. His ruck craft was somewhat compromised as he filled roles up either end of the ground in the back-end of the season, but it looks like being his preferred position at this stage. Showcasing the athleticism he proved in testing will be another step to take, with high marking and coverage of the ground very appealing in tall prospects and something McCormack is capable of growing into. Often under pressure – with 55.8 per cent of his possessions won in a contest, the Eastern big man averaged less than a clanger per game to finish the season with an okay disposal efficiency of 56.8 per cent.