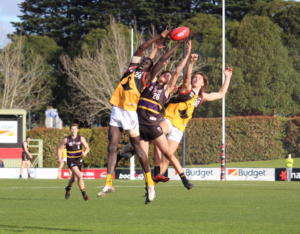 A member of St Kilda’s Next Generation Academy, Nyuon is an athlete who has testing results to be believed. A hard worker with some great goal celebrations to boot, Nyuon recorded a 92cm running and 73cm standing vertical leap, as well as a 2.86-second 20m sprint and 8.24-second agility test. Keeping in mind he is a 195cm ruck. A raw talent, he has to improve his tank, but is an excitement machine. With his elite athleticism and ability to have big moments in games – such as kicking two goals in the final quarter of the knockout Wildcard Round against Murray Bushrangers, Nyuon has shown in glimpses what he is capable of. A long-term prospect who the Saints would have to be considering as a rookie, Nyuon is a hard worker who is hard to bring down and is likely to be a player that will need patience to fully develop, but very few can do what he can in terms of his size and athleticism.