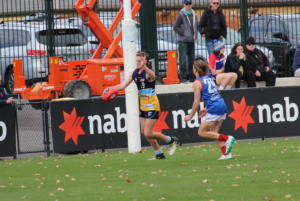 THE Bendigo Pioneers’ midfielder/defender described his year as “consistent, but nothing out of the box” which pretty much sums him up. Worme is a consistent player with a neat outside game and clean hands, as well as good versatility, without having a complete standout trait. He has his athleticism to work on, and could provide a greater inside presence given his 189cm/81kg frame, but finished the season with a 70.9 per cent disposal efficiency which is quite impressive. However his kicking consistency – he averaged 1.5 clangers per game could still develop, with his clean hands (85.1 per cent efficiency) certainly a strength of his. Playing in the defensive half, Worme averaged 3.3 rebounds and was trying to get forward and almost averaged two inside 50s per game as well. Like many at his size, Worme is more of a long-term prospect with a good base to start with and see how much he can develop over the next few years having already added nine kilograms to his frame this year.