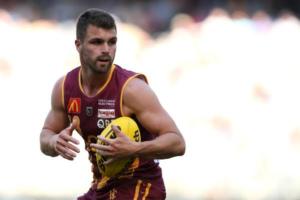 A prominent goalkicker, Sokol finally earned a State Combine invitation after a sensational year of 60 goals in 20 games. He took 8.3 marks to go with his 14.5 touches in the WAFL for premiers Subiaco, including a bag of seven goals, and three bags of six majors. With some of the hauls he has caught the eye, but with a 3.30-second 20m sprint and 70cm running vertical leap, he has athletic areas to work on. The way Sokol can outmuscle his opponents is a feature of his game and very few can match him one-on-one and despite being undersized for a key forward, Sokol knows how to find space and then force an opponent to engage. On pure numbers alone, Sokol’s season has been remarkable, and for a club perhaps close to a flag, the recently turned 24-year-old could be an option to look at. Sokol really threw himself into the limelight winning the Bernie Naylor Medal for best on ground in the WAFL Grand Final, booting six goals in the 96-points smashing. He will need to develop other areas to win the ball at AFL level given the strength and smarts of opponents in the competition, but with a full pre-season under his belt in an elite system, Sokol could be a wildcard for a club.