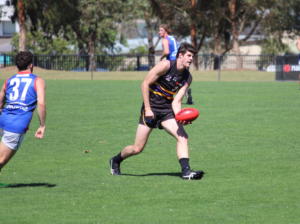 THE overage ruck has played a bit of everywhere, having transitioned from a ruck role into a key defensive post, and pinch-hitting up forward this year. At 203cm and 100kg, Kelly is a readymade prospect with good size and strength, and is mobile for his giant frame. He does need to build his endurance with a sub-20 yo-yo test, as well as his defensive pressure at ground level, averaging just the 1.3 tackles per game. Kelly was one of a number of players whose name was raised for the mid-season draft, but instead he remained at Murray for the season and was fairly consistent throughout 2019. For a player of his size, Kelly uses the ball well with almost 70 per cent disposal efficiency, and speedy for his frame with a 3.05-second 20m sprint time. Most impressively, with a 88cm running vertical leap, Kelly is able to beat most players in the air, and have them covered at ground level. A legitimate value pick late/rookie with scope for the future.