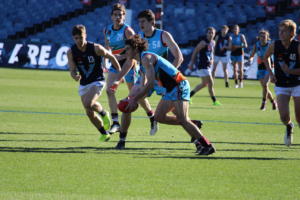 THE inside midfielder received a call-up to the Allies squad after a strong month with Northern Territory in the NAB League Boys Academy Series. He had no fear winning the ball at the coalface and is physically ready to match it with senior players. Jungfer also played for Woodville-West Torrens in the SANFL to gain some experience across two states given he boards at school in South Australia. As a whole, Jungfer was arguably the most consistent NT player across the Academy series, averaging 22.6 disposals, 6.6 clearances and 5.2 tackles per game. His contested game is strong, averaging a mind boggling 16.2 contested possessions per game at a rate of 68.6 per cent. All things considered, his kicking efficiency of 59.6 for the five games is quite impressive, and with less than a clanger by foot every game, is generally pretty reliable, even if he is forced to kick in rushed situations more often than not. Jungfer does have outside areas to build on such as his spread and scoreboard impact, because of his high volume of contested ball. He has become so prominent at it, he does not have as much versatility as some other midfielders, but is also well prepared for senior football given his attack on the ball. Overall, Jungfer showed enough consistency to earn a State Draft Combine invite and could develop into that hard-nosed inside midfielder with a fierce attack on the ball who could play any role for his side in that midfield group.